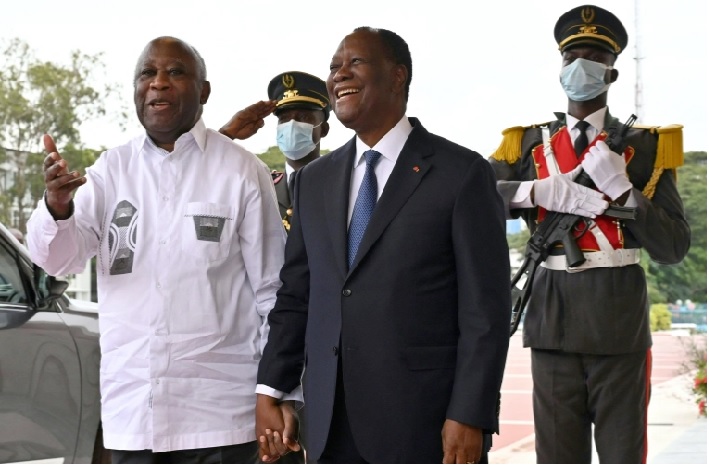 The highly anticipated meeting was an attempt to ease political tensions that have been present since their last meeting more than a decade ago, when Ouattara defeated Gbagbo in presidential elections.

Gbagbo’s refusal to concede led to months of clashes between their supporters that left more than 3,000 people dead. Ouattara ultimately prevailed and has been the president of Ivory Coast ever since

“I am very happy to see you again after all these years,“ said Ouattara, smiling next to Gbagbo after the two hugged upon his arrival at the Presidential Palace in Abidjan.

After the meeting, Ouattara said he was delighted at the meeting and hoped to urge reconciliation in the West African nation.

“We can congratulate ourselves on having had this meeting which was cordial and fraternal because Laurent is my young brother and my friend,” he said. “Of course, there was this crisis, there were differences, but that is behind us. What matters is Ivory Coast and peace in our country. We have to move forward for the next generations.”

Ouattara said they spoke about the need to strengthen national cohesion and would meet again from time to time. He urged Ivorians to work toward trust.

Ouattara won a controversial third term late last year after the opposition claimed many of its candidates were disqualified, including Gbagbo.

Gbagbo said they spoke fraternally Tuesday. “I wished that from time to time we could have these kind of talks that relax the atmosphere in the country,” Gbagbo said.

Gbagbo said he pleaded for the release of the detainees from the 2010 post-election crisis.

“I am out today and they are in jail. I would like the president to do whatever he can to free them,” he said. “Apart from that, we talked about the Ivory Coast, which must move forward,” and hold conversations, he said.

Since returning home, Gbagbo has met with Henri Konan Bédié, a former head of state who is another political rival. He also went to his native village in the center-west of the country and visited Congo.

Gbagbo was arrested and extradited to the ICC at The Hague, Netherlands, in 2011 and spent eight years awaiting trial on the war crimes charges. A judge acquitted him in 2019, saying prosecutors failed to prove their case.

The verdict was appealed but upheld in late March, clearing the way for Gbagbo to leave Belgium, where he had spent the past two years.

Some of his opponents maintain he should be jailed in Ivory Coast and not given a statesman’s welcome.

It still remains unclear what will become of other pending criminal charges against him. Gbagbo and three of his former ministers were sentenced to 20 years in prison on charges they broke into the Abidjan branch of the Central Bank of West African States to get cash amid the post-election crisis in January 2011.