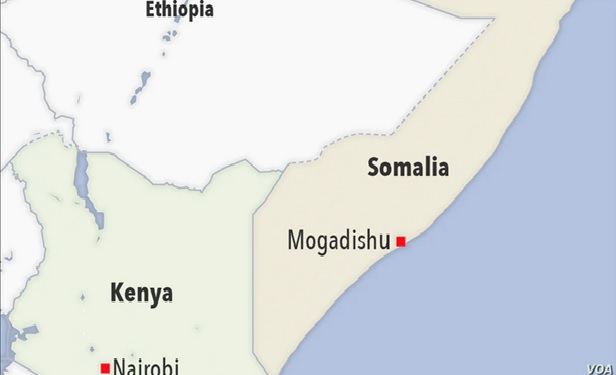 The United States is again targeting fighters with the al-Qaida-affiliated al-Shabab terror group in Somalia, launching its second airstrike in the past four days following a nearly six-month hiatus that began when President Joe Biden took office.

The United States is again targeting fighters with the al-Qaida-affiliated al-Shabab terror group in Somalia, launching its second airstrike in the past four days following a nearly six-month hiatus that began when President Joe Biden took office.

The strike, by U.S. Africa Command (AFRICOM), appears to be part of an effort to lend U.S. airpower to what has been described as a fierce struggle on the ground between the Somali military and al-Shabab in Galmudug state, the same region targeted in Tuesday's airstrike.

Pentagon press secretary John Kirby told VOA and other reporters traveling aboard a U.S. military aircraft with Defense Secretary Lloyd Austin that Friday's strike was carried out in support of Somali forces near the village of Qeycad. He said the strike was permitted by the powers granted by the 2001 Authorization for Use of Military Force.

Kirby added that just as with the earlier airstrike, U.S. troops were not on the ground with Somali forces but were conducting a remote advise-and-assist mission. Further information was not provided because of "operational security."

Al-Shabab is 'no match'

"Al-Shabab's tactics are no match for the Danab [Somali special forces] and its partners," the statement added, further describing the strike as having a "crippling" impact on the al-Shabab fighters.

The resumption of U.S. airstrikes against al-Shabab comes as military and intelligence officials in the U.S. and around the world warn of a growing threat from the al-Qaida-linked group.

Late last month, AFRICOM Commander General Stephen Townsend told a virtual defense forum that the spread of terrorism "has continued relatively unabated" across Africa, and he singled out al-Shabab as a major concern.

"We see threats in Somalia to regional stability," he said. "We even see threats there to the U.S. homeland."

Those concerns are being echoed by intelligence agencies from other countries and U.N. monitors, who warned in a report released Friday that al-Shabab has been successfully exploiting a security vacuum created by the departure of U.S. troops and a partial drawdown of the African Union Mission in Somalia.

In central and southern parts of the country, al-Shabab has "encountered little resistance in capturing several towns … in areas that had previously been hostile," the report said.

The intelligence from U.N. member states also warned that al-Shabab, already able to boast having 10,000 fighters under its command, is gaining more advanced military capabilities.

The group "has significantly increased its use of drones to conduct reconnaissance flyovers and record the activities of security forces," the report said, warning that al-Shabab may soon start weaponizing the drones as well.

Some intelligence agencies voiced fears that the drones could be used to supplement al-Shabab's portable air defense systems in potential attacks on low-flying aircraft and aviation infrastructure along the border with Kenya. The area has served as a critical corridor for humanitarian flights and commercial aircraft.

Earlier this year, some Somalis voiced concerns that the pause in U.S. airstrikes was serving to embolden al-Shabab, allowing key leaders to come out of hiding and their fighters to mass in larger numbers without fear.

Another seven airstrikes were launched in the first 2½ weeks of 2021, before former U.S. President Donald Trump left office.

Not everyone, however, is convinced that the previous pace of U.S. airstrikes has made much of a difference.

Stephen Schwartz, the U.S. ambassador to Somalia from 2016 to 2017, told VOA that airstrikes against al-Shabab and the Islamic State group have "limited or modest value" in the overall fight against extremists, but they are extremely useful "in keeping al-Shabab on its back foot."

"With no airstrikes for months and months, I would imagine al-Shabab is more relaxed, but also more able to do the things they couldn't, whether it's mobility, training more in the open, just lots of things that could make them more effective," Schwartz said.

Some Somali military officers have also expressed concerns, telling VOA that while airstrikes can be helpful, they need additional support, including better weaponry and supplies to fight al-Shabab on the ground.

Statistics compiled by the Armed Conflict Location and Event Data Project (ACLED), a U.S.-based nonprofit research group, suggested that the danger to civilians in Somalia from al-Shabab actually decreased in the absence of airstrikes.