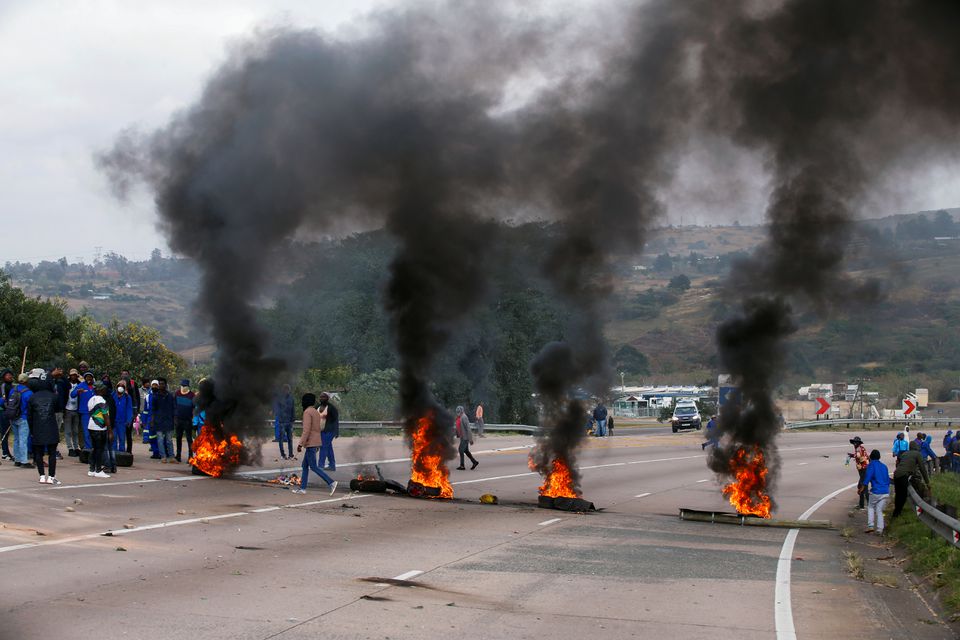 The 79-year-old former president was jailed for defying a court order to testify before a state-backed inquiry probing allegations of corruption during his term as president from 2009 to 2018.

His bid to be released from the Estcourt Correctional Centre was rejected by a regional court on Friday. He is set to make another attempt on Monday with the Constitutional Court, the country’s highest court.

The rioting by Zuma’s supporters began in his home region of KwaZulu-Natal province last week and spread during the weekend to Gauteng province, which includes Johannesburg, South Africa’s largest city.

Several hundred people looted and burned stores in the Alexandra and Bramley neighbourhoods of Johannesburg, according to a statement by police Major General Mathapelo Peters.

The body of a 40-year-old man was recovered from a shop that had been burned and police are investigating the circumstances, he said.

In addition, at least three police officers were injured when trying to arrest looters and one was admitted to hospital, according to the statement.

The AFP news agency said the N3 highway linking Johannesburg and the coastal city of Durban in KwaZulu-Natal was blocked for many hours, including a stretch south of the Estcourt prison, where Zuma is being held.

The agency said some 23 trucks were also set alight at Mooi River around 150 kilometres (100 miles) northwest of Durban.

President Cyril Ramaphosa reiterated calls for calm on Sunday in a speech focused on COVID-19 restrictions, urging people to express themselves “in peaceful protest” and avoid acts that endanger lives and damage the economy.

“People have been intimidated and threatened, and some have even been hurt,” Ramaphosa said, adding that “some people may have died.”

Despite the appeal for calm, looting continued into Sunday evening in the area around Durban.

Police said they are increasing capacity in both provinces and warned Zuma’s supporters against inciting violence on social media, saying they could become liable for criminal charges.

Shops will remain shut on Monday in both Kwa-Zulu Natal and Gauteng to avoid looting, district associations said.