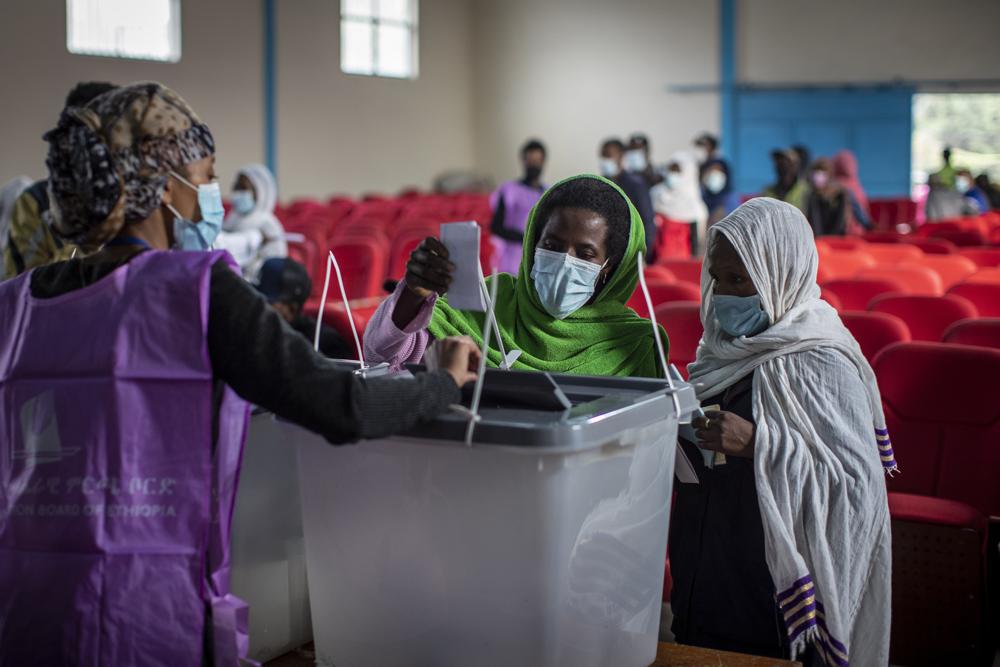 Polls open against the backdrop of internal strife, with PM Abiy Ahmed expected to cement his hold on power.

Ethiopians cast their votes in the general election at a polling center in the capital Addis Ababa, Ethiopia, Monday, June 21, 2021. (AP Photo/Ben Curtis)

Polls open against the backdrop of internal strife, with PM Abiy Ahmed expected to cement his hold on power.

Ethiopians have voted in a crucial parliamentary election taking place against the backdrop of war and famine in the northern Tigray region and questions over the poll’s credibility, with Prime Minister Abiy Ahmed expected to cement his hold on power.

On Monday long lines of voters were seen in some parts of the capital, Addis Ababa, while security was stepped up across Africa’s second-most populous country.

Polling stations were scheduled to close at 6pm (15:00 GMT) but were extended at the last minute by three hours to allow for final voting, the electoral board said.

Abiy, a Nobel Peace laureate who freed political prisoners, welcomed back exiles and ended a long cold war with neighbouring Eritrea before sending troops to confront the dissident leadership of Tigray late last year, has promised this election will be Ethiopia’s most competitive in history, free of the repression that marred previous ballots.

He said on Monday that the spirit of this election “is much better in many ways than the previous elections” adding that the country is “witnessing the atmosphere of democracy”.

But international concern has been growing about the vote, and opposition groups have accused Ethiopia’s ruling party of harassment, manipulation and threats of violence that echo abuses of the past.

In more than 100 of the country’s 547 constituencies, polls are not even open – either because of the ongoing war in the northern Tigray region or logistical issues elsewhere. No date has been set for voting in Tigray’s 38 constituencies. The rest will vote in September – and the next government likely will not be formed until that happens.

Abiy is also facing growing international criticism over the war in Tigray, sparked in part because the region’s now-fugitive leaders objected to Ethiopia postponing the election last year amid the COVID-19 pandemic.

Opposition candidate Berhanu Nega with the Ethiopian Citizens for Social Justice party told reporters that his party had recorded more than 200 instances of its election observers being “kicked out” of polling stations or denied access. He said he hoped the troubles “do not reflect the whole process”.

Getnet Worku, secretary general of the opposition ENAT party, accused ruling Prosperity Party members of campaigning inside polling booths and said five of his party’s agents were detained for several hours, calling it “a matter of intimidation”.

Ethiopia’s election chief, Birtukan Mideksa, told reporters that some election-related problems had been witnessed in the Amhara, Afar and Southern regions with some observers having difficulty in moving around and doing their job.

“This will jeopardise the credibility of the election process,” Birtukan warned. “Local officials and law enforcement officers should immediately take corrective measures.”

But in most areas, including the capital, voting went peacefully.

“I believe this election will shine a light of democracy on Ethiopia,” said Yordanos Berhanu, a 26-year-old accountant at the head of a queue of hundreds.

“As a young Ethiopian, I (have) hope for the future of my country, and believe voting is part of that,” she said before slipping her ballot papers into a purple plastic box for the national vote and a light green one for the regional election.

“This election is different,” said Milyon Gebregziabher, a 45-year-old travel agent voting in the centre of Addis Ababa.

“There are a number of parties to choose from. In the past there was just one, we did not have the luxury of choice.”

Once votes are counted, national MPs will elect the prime minister, who is head of government, as well as the president – a largely ceremonial role.

Abiy’s ruling Prosperity Party has fielded the most candidates for national parliamentary races and is the firm favourite to win a majority and form the next government.

Security was ramped up for the election, with police marching in force in Addis Ababa over the weekend and reinforcements deployed across the country.

The election has been delayed twice – once because of the coronavirus pandemic, and again to allow more time to organise the ballot across a huge nation.

Some 38 million Ethiopians are registered to vote but polls will not open in nearly one-fifth of Ethiopia’s 547 constituencies. Some areas have been deemed too insecure – plagued by armed conflicts and ethnic violence – while in others logistical setbacks made arranging a vote in time impossible.

A second round of voting is to take place on September 6 to accommodate many of the districts not taking part on Monday.

But there is no election date set for Tigray, where UN agencies say 350,000 people face famine conditions, and atrocities have been documented.

The northernmost region represents 38 seats in the national parliament and has been governed by an interim administration since November, when Abiy sent troops in, promising a swift campaign to overthrow its ruling party.

Seven months later, the conflict drags on, damaging Abiy’s standing as a peacemaker and overshadowing a vote meant to broadcast Ethiopia’s democratic intent.

In a handful of places where the vote is going ahead on Monday, opposition parties are boycotting in protest, reducing some constituencies to a one-horse race.

Even in the best of times, organising smooth elections is a tall order in Ethiopia, a huge country hobbled by poor infrastructure.

Observers have pointed out that logistical support usually comes from the military, which is largely tied up in Tigray, leaving organisers short on manpower.

But after months of setbacks and delays, election officials said they were ready for Monday’s vote, which involves more than 40 parties and 9,500 candidates.

Vote counting is due to start soon after polls close, but results are not expected for days.

Meanwhile on Monday, the UN rights chief voiced alarm at continued reports of “serious violations” in the Tigray region by all parties in the conflict, including continued abuses by Eritrean troops.

“I am deeply disturbed by continued reports of serious violations of international humanitarian law and gross human rights violations and abuses against civilians by all parties to the conflict,” Michelle Bachelet told the UN Human Rights Council.

She pointed to “extrajudicial executions, arbitrary arrests and detentions, sexual violence against children as well as adults, and forced displacement”.