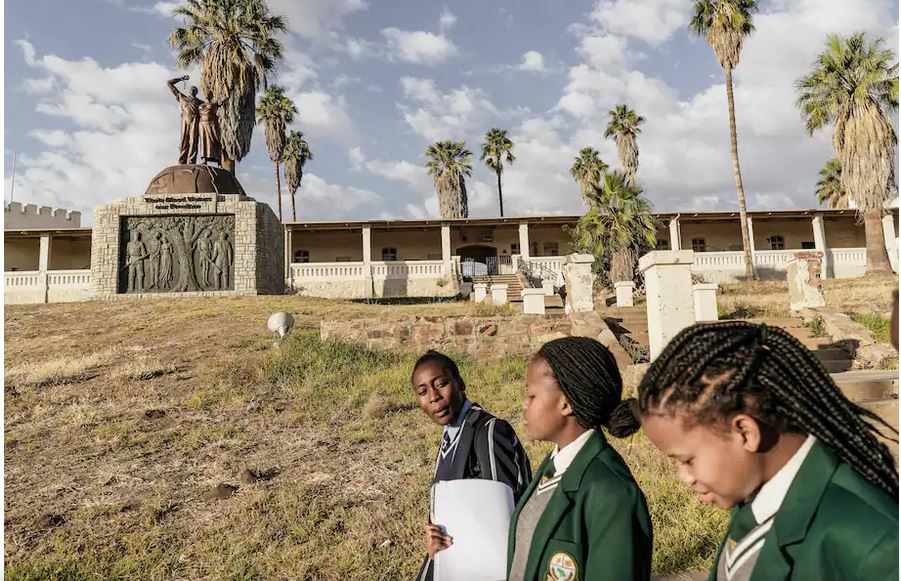 Namibian schoolgirls walk by a memorial to the victims of the genocide committed by German forces PHOTO: Getty images

In late May, more than 100 years after German colonial forces killed tens of thousands of the Herero and Nama peoples in what is today Namibia, the German government formally acknowledged the atrocities as genocide.

German Foreign Minister Heiko Maas declared that, owing to Germany’s “historical and moral responsibility,” the country asks “Namibia and the descendants of the victims for forgiveness.” In addition, Germany will contribute more than $1 billion in aid for development projects in Namibia over the next 30 years. All of this will be finalized in a bilateral agreement.

Why the major step toward reconciliation? My research details the decades-long silence in Germany about the atrocities and the slow and incomplete process of reconciliation since the early 2000s. But the recent news reports miss some important points: The German gesture makes existing government practice official — yet falls short of demands by descendants of the Herero and Nama.

Namibia was a colony known as “German South West Africa” from 1884 to 1915. Between 1904 and 1908, German colonial forces brutally suppressed anti-colonial uprisings by the Herero and Nama people, leaving thousands to starve in the desert. German colonial officers issued extermination orders targeting the Herero and Nama, who had rebelled against the colonizers. German colonizers also set up concentration camps, expropriated land and exported human remains for “medical experiments” in Germany.

In 1915, South African forces defeated the Germans. The German Reich, as Germany was known then, had to cede its colonies after its defeat in World War I. In 1919, Namibia became a mandate territory under the League of Nations, administered and later effectively occupied by South Africa.

The genocide in Namibia garnered attention in the United States after Herero and Nama representatives in 2017 sued the German government for the genocide and theft perpetrated during the colonial era, in a class-action lawsuit in a U.S. district court. In 2020, an appeals court dismissed the lawsuit because the judges could find no reasonable commercial link to German property in the United States.