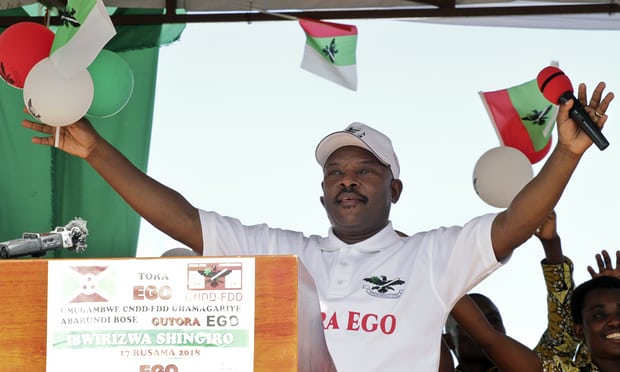 Millions of voters in Burundi will go to the polls this week in a referendum that could allow president Pierre Nkurunziza to stay in power until 2034.

Millions of voters in Burundi will go to the polls this week in a referendum that could allow president Pierre Nkurunziza to stay in power until 2034.

After a campaign marked by allegations of widespread human rights abuses and hate speech, members of Burundi’s divided and weakened opposition see little chance of any serious resistance to Nkurunziza’s efforts to secure his future at the head of the impoverished state.

Burundians are being asked to vote yes or no to a proposal to extend the president’s term from five years to seven, which would allow Nkurunziza, who has been in power since 2005, to rule for another 14 years when his term expires in 2020.

Tensions have been running high in Burundi for months amid a wave of alleged detentions and killings of the government’s perceived opponents. At least 26 people were killed and seven others wounded in an attack in the north-western province of Cibitoke on Friday, though it is unclear if the massacre was politically motivated.

Burundi’s Catholic bishops have said that “many citizens … live in fear, so much so that people do not dare to say what they think, for fear of reprisals”, while the EU and the US have denounced intimidation, repression, violence and harassment of opposition supporters.

Human Rights Watch has criticised “widespread impunity” for authorities and their allies, including the ruling party’s youth wing, as they try to swing the vote in the president’s favour. Two men recently died after beatings allegedly at the hands of state agents, the rights group said.

“People are intimidated, arrested, disappeared and even assassinated. But what is important is not who wins the vote, but the determination of the people to defend the constitution despite the repression. That’s the important result,” said Anschaire Nikoyagize, of the banned Ligue Iteka, a human rights NGO.

Burundi’s government has said the charges are malicious propaganda spread by exiles. Last week, it suspended BBC broadcasts in the country for six months, accusing it of spreading ideas that discredit the president. Voice of America broadcasts were also suspended.

Members of the Imbonerakure, the ruling party’s youth wing, have in the past urged supporters to harass opposition members, even to “impregnate” them.

SOS Medias Burundi, a network of independent journalists, has reported the arrests over a single week last month of more than 50 members of the opposition coalition Amizero y’Abarundi.

At least 10 of those were arrested while celebrating a colleague’s successful defence of his university thesis, a gathering the authorities deemed subversive, the group said.

Another 30 opposition activists were detained when travelling to a campaign meeting in the east of Burundi. Police said they were not carrying national identity cards.

Late last month, Germain Rukuki, a human rights activist, was sentenced to 32 years in prison on charges that included rebellion, a sentence Amnesty International called “an insult to justice”.

In March, three members of the Burundian non-governmental organisation Words and Actions for the Awakening of Consciences and the Evolution of Mentalities (PARCEM), were sentenced to 10 years in prison.

Many in Burundi, a poor country that relies heavily on foreign aid, worry that a fresh round of bloodshed will follow the referendum, which will also permit changes to the distribution of top government posts according to ethnicity. National and local government, parliament and the senate are composed of both Hutu and Tutsis, split 60% to 40%.

“In the short term there are only pockets of violence and serious human rights abuse … but in the medium to long term the government is unravelling the settlement that ended the civil war and brought 15 years of peace – and that does not augur well,” said Richard Moncrieff, a regional specialist with the international Crisis Group.

In March, the ruling party announced Nkurunziza, 54, a former rebel leader, was to be known as “Imboneza yamaho”, translated variously as “eternal supreme guide”, or “visionary leader”.The government rejects all charges of wrongdoing and some analysts say the criticism is unfair.

Nic Cheeseman, professor of democracy at Birmingham University and an expert on African politics, said Nkurunziza had learned from other leaders in the region.

Paul Kagame, president of neighbouring Rwanda, won re-election last year, standing for a third seven-year term following a constitutional reform that waived a previous two-term limit and was approved by 98% in a referendum.

In DRC, president Joseph Kabila has ignored the end of his second mandate and is yet to give an assurance that he will not seek a third term in polls scheduled for December.

“Leaders are getting more and more strategic and clever about how they package democratic backsliding for domestic and international audiences,” Cheeseman said.

Hajayandi said Burundi was being criticised by states and organisations in the west because the country “had a tendency to be close to China and Russia”.

“We cannot build our democracy on the western example. We have our own realities. People are going to be more inspired by China, a Communist country, which seems more stable than western countries that are seen as declining.”

Source: The Guardian - BY Jason Burke