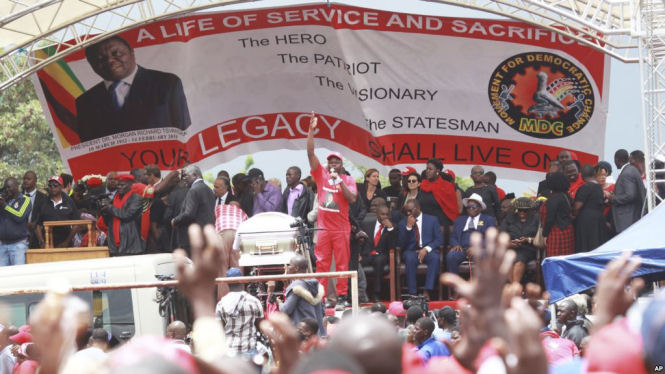 Thousands of Zimbabweans gathered Tuesday to bid a final farewell to opposition veteran Morgan Tsvangirai who was one of Africa's most admired politicians and lived to see the fall of his political nemesis Robert Mugabe.

Zimbabwean Movement for Democratic Change supporters gather to pay their last respects during the burial of former leader Morgan Tsvangirai in Buhera, Zimbabwe, about 200 kilometers southeast of Harare, February 20, 2018. (AP)

Thousands of Zimbabweans gathered Tuesday to bid a final farewell to opposition veteran Morgan Tsvangirai who was one of Africa's most admired politicians and lived to see the fall of his political nemesis Robert Mugabe.

Tsvangirai, the country's fiercest opponent of former president Mugabe's tyrannical 37-year rule, died on Wednesday aged 65 at a hospital in South Africa where he had been undergoing treatment for colon cancer.

His body was flown to the burial ceremony aboard a military helicopter, accompanied by his mother Mbuya Tsvangirai.

Thousands of mourners, braving the rain, gathered for the burial at Tsvangirai's Buhera rural home, 220 kilometres (135 miles) south of Harare.

Zimbabwe's Vice President Oppah Muchinguri also attended along with US and European diplomats.

Many people in the crowd blew whistles and wore red shirts emblazoned with Tsvangirai's portrait, some weeping openly.

Tsvangirai's dreams of unseating Mugabe through the ballot box were dashed at several elections.

But he lived to see Mugabe resign in November, amid moves by his own party to impeach him, ending his 37-year reign of autocratic control and brutality.

Mugabe, who turns 94 on Wednesday, and his wife Grace sent their condolences to Tsvangirai's family.

Kenyan opposition leader Raila Odinga, attending the event, condemned political oppression in Africa as he addressed supporters of Tsvangirai whose electoral ambitions, like Odinga's, were thwarted at controversial polls.

"Africa is littered with elections which are rigged," Odinga told the crowds.

Tsvangirai beat Mugabe in the first round of presidential polls in 2008 but narrowly fell short of the total required to win outright, according to the official vote count.

Tsvangirai pulled out of an election run-off following violence which, he said, claimed the lives of at least 200 of his supporters.

Odinga insists he was the rightful winner of general elections in Kenya in August which extended President Uhuru Kenyatta's rule.

"We need to have clear and proper transparent elections in Africa. Rigged elections will not help Africa," Odinga told mourners.

"Morgan's election victory was stolen a year after mine was stolen in Kenya," Odinga said, referring to the 2007 elections which he alleges were rigged to ensure Kenyatta's victory.

Tsvangirai was a tenacious opponent of the ruling ZANU-PF party's four-decade hold on power.

Following the 2008 election violence, he was forced into a power-sharing government with Mugabe, who was ousted last year following a military takeover.

"He agreed to sacrifice his victory in order to save Zimbabwe. He became one of the leading icons of the second liberation of Africa," Odinga said, describing Tsvangirai as "my dear brother" and a "hero".

Zimbabwe is due to hold crucial general elections by July and the country's new president Emmerson Mnangagwa has pledged they will be free, fair and credible -- in honour of Tsvangirai.

After being repeatedly beaten and jailed by the regime, Tsvangirai became a symbol of resistance to the ruling ZANU-PF's authoritarianism, entrenched since Zimbabwe broke from its colonial master Britain in 1980.

"We want to thank Morgan Tsvangirai for fighting for our rights. He was a humble man -- a man who was loved by people," said Christopher Chikwati, a 70-year-old resident of Tsvangirai's village. "We will remember him forever."

"We are here to mourn the president of Zimbabwe, Morgan Tsvangirai -- a great Zimbabwean, a great African," he said.

"He was arrested. He was beaten. The people of ZANU-PF are also here, they are the people who killed Morgan Tsvangirai."

Tsvangirai's death has sparked a bitter succession struggle within the opposition MDC party which is threatening to divide the party to the benefit of ZANU-PF.

Those tensions were on display even before Tsvangirai was in the ground, with MDC deputy president Thokozani Khupe booed during the funeral and criticised by "drunken" party youth members, according to party official Douglas Mwonzora.