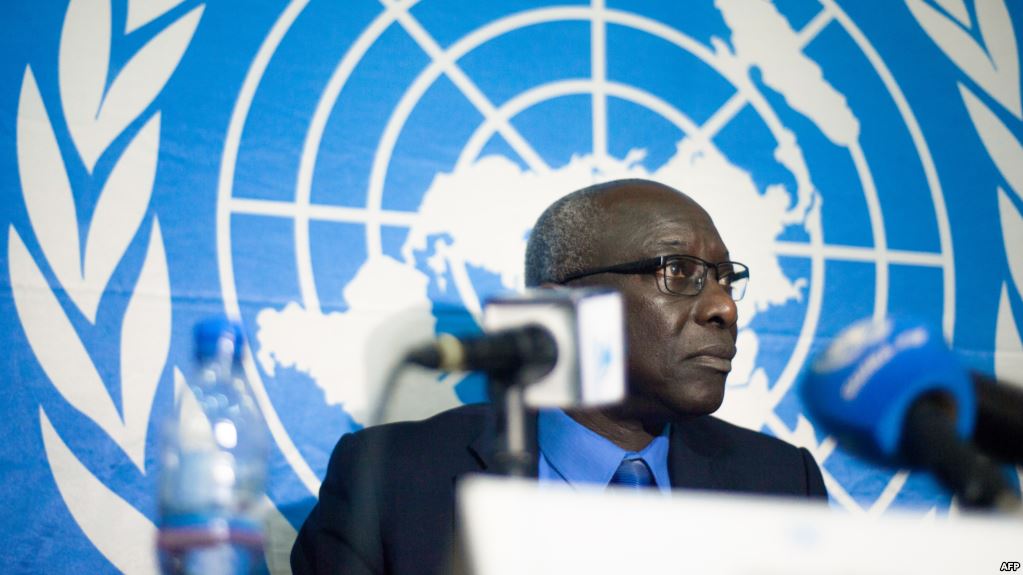 The U.N. Secretary General's Special Adviser for the Prevention of Genocide Adama Dieng is defending the performance of the United Nations Mission in South Sudan (UNMISS)

Adama Dieng is the UN Secretary-General's Special Adviser for the Prevention of Genocide. (AFP)

The U.N. Secretary General's Special Adviser for the Prevention of Genocide Adama Dieng is defending the performance of the United Nations Mission in South Sudan (UNMISS)

Dieng told South Sudan in Focus that there is a need to educate South Sudanese citizens on the mandate of the UNMISS, a 12,000-member U.N. peacekeeping force authorized by the U.N. Security Council to protect civilians following an outbreak of deadly violence in South Sudan’s capital in December 2013.

The U.N. diplomat insisted that peacekeepers serving under UNMISS have saved the lives of thousands of civilians trapped in Juba and other towns during fighting between South Sudan army and rebels of the Sudan Peoples’ Liberation Movement in opposition (SPLM IO) loyal to former first vice president Riek Machar.

"UNMISS is neither an intervention, nor an interposition force. It can only operate with the consent of the host government," he said.

Dieng said the government of South Sudan should cooperate with UNMISS to allow the men and women in the blue helmets to discharge U.N. Security Council resolution 2327 (2016) that calls on the warring parties to return to the peace process and empowers UNMISS to use necessary tools to protect civilians.

He said the sole responsibility to protect civilians lies with the government of South Sudan, adding that in the event a state fails to protect its civil population, such state should seek assistance from the international community, neighbors and the region to discharge its role of civilian protection.

"It is in this context that the Intergovernmental Authority on Development (IGAD), the African Union, the United Nations, the Troika (Norway, the United Kingdom and the United States) and the international community at large, are assisting South Sudan to end the conflict and protect its citizens,’’ he said.

However Dieng said if a state is unwilling to protect its citizens and the state is complicit in committing crimes against humanity, genocide and ethnic cleansing, the international community has the responsibility to protect civilians.

The head of UNMISS, David Shearer, has in the past echoed frustrations from aid agencies who accused the government and rebels of blocking humanitarian workers from reaching families in desperate need of food, health and shelter.

"It is important that the [South Sudan] government guarantees free movement of the peacekeepers and cooperate to enable the development of the additional 4,000 U.N.'s Regional Protection Force (RPF). You cannot blame the U.N. on the ground; they have been doing what they can," he said.

The Peace and Security Council of the African Union (AU) established the Commission of Inquiry on South Sudan as part of its response to the December 2013 crisis in the country and recommended the formation of a hybrid court. U.N. Special Adviser Dieng visited Yei River State in November 2016 and warned of a potential genocide in South Sudan.

"Therefore what is needed today is to make sure that the victims of this conflict in South Sudan get legal redress,’’ he said.

Dieng said the IGAD’s High Level Revitalization Forum, scheduled to meet next week in Addis Ababa, should pressure the African Union to expedite the formation of the hybrid court as required in the August 2015 peace deal. The court is expected to try individuals who committed crimes during the four years of conflict in South Sudan.

"I should say that [the] African Union has done a lot. But unless the government of South Sudan accepts to cooperate for the implementation of the hybrid court, it will be difficult,’’ he said.

"When I got in Yei [town], I was moved to hear a testimony about an old woman of 84 years, old lady who was raped. I mean, this cannot be tolerated,” Dieng exclaimed.

The Troika has issued a warning to warring parties to negotiate in good faith at IGAD's much anticipated High Level Revitalization Forum in Addis Ababa.