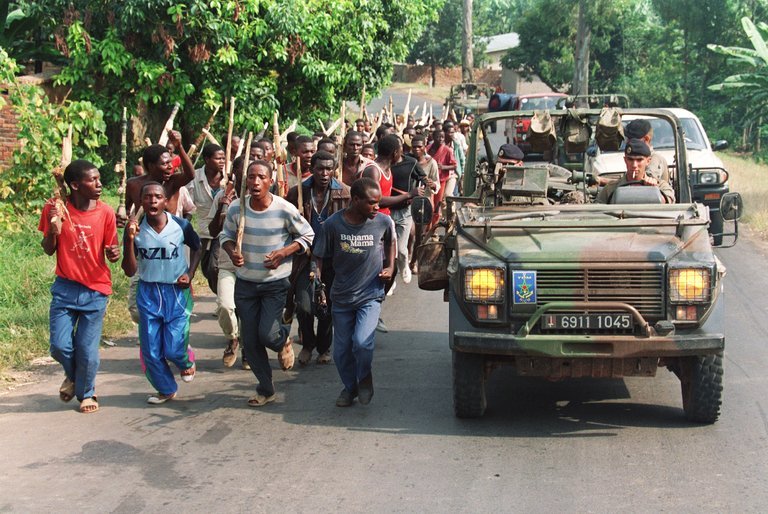 The Rwandan government released an independent report on Wednesday accusing French officials of complicity in the 1994 genocide, risking further strains to already icy relations between the two countries.

The Rwandan government released an independent report on Wednesday accusing French officials of complicity in the 1994 genocide, risking further strains to already icy relations between the two countries.

The report, commissioned by the Rwandan government and conducted by a Washington law firm, alleges that French military forces trained their Rwandan counterparts, supplied them with weapons even after an arms embargo, and gave cover, under the auspices of a United Nations-sanctioned humanitarian mission, in the last moments of a genocidal campaign.

Researchers and the Rwandan government say they cannot get France to make good on earlier commitments to fully open its archives or otherwise investigate the country’s role.

“What happened in the early ’90s and even before, in the lead-up to the genocide, is something France will have to come to terms with,” said Louise Mushikiwabo, the foreign minister of Rwanda. “Rwanda is not going away. We’re not going anywhere.”

Archival documents show that the French government was a close ally of the Rwandan regime that planned and perpetrated the mass slaughter of an estimated 800,000 people, most of them members of the Tutsi ethnic minority. Historians say a son of François Mitterrand, the French president at the time, was also a close friend of the Rwandan leader whose government organized the genocide.

“There were cases where they found Tutsi refugees, saw them, and then left them, and more of them were killed,” said Timothy P. Longman, the director of the African Studies Center at Boston University. “It’s one thing after another. The French absolutely deserve to be condemned.”

The two governments have repeatedly tussled over access to information, in procedural disputes that are part of a larger political drama.

In 2006, a French judge opened an investigation into the 1994 plane crash that killed President Juvenal Habyarimana of Rwanda, a member of the majority Hutu ethnic group. The crash is widely seen as the spark that ignited the genocide, making responsibility for the crash one of the most politically volatile questions in Rwanda.

According to diplomatic cables, French officials at the time blamed the Tutsi rebel army led by Paul Kagame, now Rwanda’s president. Mr. Kagame’s government has long maintained that the plane was shot down by Hutu military actors.

The Rwandans responded to the investigation by severing diplomatic ties with France and initiating their own inquiry into the French role in the genocide. The two countries did not restore diplomatic relations until 2009.

The relationship nevertheless remains fraught. In 2015, France blocked the nomination of Rwanda’s ambassador to the European Union; the country is still waiting for approval of its new appointee for the post, according to Rwandan government officials.

France’s reluctance to prosecute individuals involved in the genocide has further aggravated the situation.

Last year, the Rwandan government asked the French for permission to question some of the 22 French military officers who it said bore some responsibility for the killings. The French government has never replied to that request, said Ms. Mushikiwabo, the foreign minister.

In October, an investigative judge at the Paris Court of Appeal upheld a decision not to investigate two top French military figures in Rwanda for complicity in the genocide. Among the issues raised was alleged French responsibility for the deaths of hundreds of Tutsis at Bisesero, while French troops were present only miles away, according to the International Federation for Human Rights, a Paris-based organization that was party to the case.

Rwandans living in France who are suspected of perpetrating the genocide — including the then-president’s wife, thought to have been a mastermind of the massacres — have also largely escaped prosecution. In 2013, the French government started a special unit for investigating war crimes, but only a few Rwandans have been prosecuted.

Ms. Mushikiwabo said the report was the first step in increasing pressure the Rwandans will bring to bear on the French. The Washington law firm Cunningham Levy Muse, which produced the report, will continue its investigations, Ms. Mushikiwabo said, adding that the Rwandan government was amassing its own archive of contemporary documents, including some left behind by the French.

The report also comes at a time of renewed interest in France’s accountability for suspected crimes abroad. Two weeks ago, during a visit to Burkina Faso, President Emmanuel Macron promised to declassify documents related to the 1987 assassination of that country’s president, Thomas Sankara. Many in Burkina Faso suspect the French of being involved in his death.

But on a visit last week to the former French colony of Algeria, Mr. Macron resisted questions about French atrocities there, insisting that it was time to “look forward.”

Mr. Macron’s predecessor, François Hollande, declassified some documents relating to Rwanda, but French researchers say too much of the primary historical record is still off-limits.

Last month, a French court denied François Graner, a French researcher on Rwanda, access to documents in the archive of Mr. Mitterrand, the French president during the genocide. Mr. Graner plans to appeal to the European Court of Human Rights.

Mr. Graner said that basic historical questions about France’s role in Rwanda remained unanswered, and that those questions very likely have far-reaching consequences.

“The Rwanda intervention is the most symbolic of the more than 50 French military interventions in Africa,” Mr. Graner said. French forces are still involved in Africa, he added, and they are deployed “with nearly the same decision-making mechanisms that were at play in Rwanda.”

Toby Cadman, an international criminal lawyer based in London with extensive experience in mass-atrocity trials, said the questions at play also had an impact on global affairs.

“Genocide like this happens when other states provide material support,” he said. “You look at the situation in Myanmar, where they’re clearly getting cover from China and the United States, and we criticize Russia for their role in Syria. It doesn’t seem like we’ve learned very much.”

Some critics say that Rwanda is an imperfect messenger on facing history, given the government’s refusal to acknowledge crimes said to have been committed by the rebel army that ended the genocide.

But Rwandan officials insist that such allegations do not absolve an unrepentant France.

“There was a civil war and a genocide in this country,” said Ms. Mushikiwabo, the foreign minister. “Clearly, it is not possible to conduct war without people dying.”

“If we were to say that yes, there were massacres, there were killings that were a result of the war that the Rwandan Patriotic Army conducted against the then-genocidaire army — that is clear,” she continued, using the official name of the rebels’ military arm at the end of the genocide. “That does not take away the fact that France was part of the planning, part of the conception, and part of the execution of the genocide.”