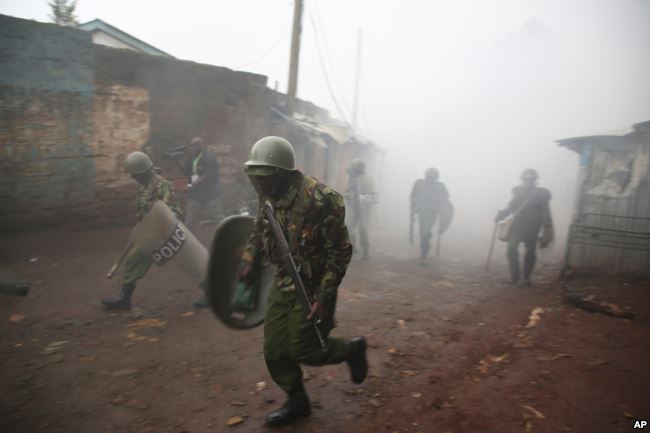 It took the police the better part of two hours to haul away the bricks that had been stacked, at some point in the night, in front of the polling station at the Olympic Primary School.

Riot police are caught in tear gas during running battle with opposition supporters in Kibera Slums in Nairobi, Kenya,October 26, 2017. (AP)

It took the police the better part of two hours to haul away the bricks that had been stacked, at some point in the night, in front of the polling station at the Olympic Primary School.

But few people in the sprawling Nairobi neighborhood of Kibera — as in many other places across Kenya — wanted anything to do with Thursday’s historic vote for president. Some Kibera residents spent the day lobbing stones at the police, while the police spent the day firing tear gas back.

“This vote is a massive flop, whichever way you cut it,” said Maina Kiai, a leader of a Kenyan civil society coalition and a former United Nations special rapporteur.

For decades, Kenya has been struggling to move from the shadow of dictatorship to a truly inclusive democracy, and the country has sacrificed much on that journey. Ten years ago, more than 1,100 people died and hundreds of thousands were displaced after an election many thought was stolen.

The violence ended with the formation of the country’s first coalition government, and a few years later, a new Constitution rejuvenated democratic institutions, strengthened the checks and balances on executive power, and decentralized the federal government — all in the hopes of making ordinary citizens feel more connected to their government.

Then, last month, came another milestone. In a first for Africa, the Supreme Court nullified this summer’s presidential election over concerns of fraud and ordered a do-over — one of the strongest signs yet that democracy was working.

But the opposition candidate pulled out of the do-over poll anyway, questioning whether it could ever be fair. Now many Kenyans fear that millions in the country will view the new government as illegitimate.

Today’s vote “was more of a blow to democracy than it was a victory,” said George Kegoro, the executive director of the Kenya Human Rights Commission, adding that the low turnout would diminish the mandate of the winner.

“It is a very, very significant legitimacy problem for whatever government he might form,” Mr. Kegoro said.

Mr. Kegoro finds little solace in the fact that the day was largely peaceful.

“I don’t think anybody thinks we have peace,” he said. “We don’t know whether the relative non-violence will be something that endures.”

It will take several days for the final results to be tallied, although the presumed winner is President Uhuru Kenyatta, who had also won the first election. His opponent, Raila Odinga, has already promised to challenge this vote, too.

Just before midnight on Thursday, with more than 90 percent of the returns received at the national tallying center, elections officials said slightly more than 6.5 million Kenyans had voted — only one third of those registered. In August, nearly 15 million ballots were cast for the two men, and turnout topped 75 percent.

The period leading up to Thursday’s vote has been fraught. A week after Mr. Odinga said he would not participate, an elections commissioner fled the country, citing threats against herself and her colleagues.

The nation’s top elections official, Wafula Chebukati, said he didn’t think the vote would be credible, because of political interference in the election commissions work. He called for dialogue between the candidates, and 20 Western diplomats echoed that call in a joint last-minute plea, but both men refused.

On Wednesday, the day before the vote, the Supreme Court couldn’t muster enough judges to hear a last-minute petition concerning the election’s credibility. The court might have delayed it, but the hearing was postponed, and the vote was on.

As polls opened across the country, Mr. Odinga’s supporters didn’t turn up — and in some places, seemed determined to make sure others couldn’t, either.

In parts of Kisumu county, an opposition stronghold, roadblocks were erected and cars were checked; the aim, local reporters said, was to keep ballots from reaching polling stations. There were reports of violence in various parts of the country, and in some places polling was delayed until Saturday because of “security challenges.”

“It was stupid to do this now, from whichever way you look at it, whether you’re a Kenyatta person or an Odinga person,” Mr. Kiai said. “The climate and the context is just so bad.”

Mr. Kegoro said that even if Mr. Odinga’s supporters did not boycott the vote, their candidate’s withdrawal created a credibility crisis.

“The person who was the second-strongest performer in the last election pulled out so late,” he said, that there was no way to “transfer his support to a different candidate.” Without a candidate to vote for, millions of people had no reason to vote at all, he added.

Ordinary Kenyans have had just about enough, losing patience even with the candidate they support.

Jeremy Maganga, a 45-year-old scrap metal dealer from Kibera, said he voted for Mr. Kenyatta, but he also blamed him, in part, for the fragile political — and economic — situation. Mr. Maganga said that business had dropped off dramatically since the court called for a new election, and that it was hard to put food on the table.

Wycliff Wanyonyi, another scrap dealer, agreed. “You feel ashamed,” he said. “You can’t meet their expectations. So you go home at night when everyone is asleep.”

Mr. Wanyonyi, 35, also voted for Mr. Kenyatta, and the first thing he wants the president to do is reach out to his longtime rival.
“There is a need of dialogue, and of reconciliation,” Mr. Wanyonyi said. “We Kenyans need each other, at the end of the day.”

For Victor Joseph, a 23-year-old poll worker in Kibera, the fragility of the political situation had turned into futility. After the dramatic twists and turns of two presidential campaigns this year, and the deadlock that has emerged between the two men, Mr. Joseph said wasn’t convinced that voting mattered.

“What effect will it have on the outcome for the country?” he said. Without a political dialogue between the two rivals, and an agreement on a path forward for Kenya, there seemed to be little point to the exercise. “Otherwise, I can’t see if anything will change.”