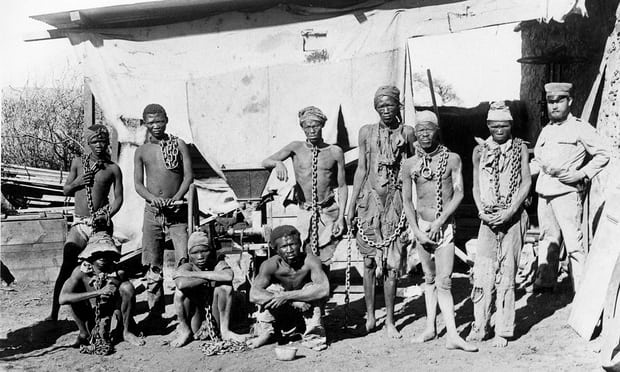 The remains of victims of concentration camps in Namibia which were gathered by a German racialist scientist for use in experiments have been found in the collection of a major US museum, campaigners claim.

Prisoners from the Herero and Nama tribes during the 1904-1908 war against Germany.(Getty Images)

The remains of victims of concentration camps in Namibia which were gathered by a German racialist scientist for use in experiments have been found in the collection of a major US museum, campaigners claim.

Representatives of the Herero and Namaqua peoples of Namibia say skulls and skeletons dating to the German occupation of south-west Africa in the decades before the first world war are being held by the American Museum of Natural History in New York.

Barnabas Veraa Katuuo of the Association of The Ovaherero Genocide said two of the eight human remains in the museum identified as from Namibia were probably those of people who died in concentration camps during an attempt by the German authorities to crush a rebellion by the Herero and Namaqua between 1904 and 1908.

The Germans’ apparent attempt to exterminate entire peoples has led to the killings being described as the “20th century’s first genocide”.

Historians have described how authorities in Namibia collected and cleaned large numbers of skulls which they despatched to Germany to be used in pseudo-scientific experiments to support racist theories regarding the inferiority of the African races and the superiority of the German peoples.

It is thought some reached the US when the museum bought the private collection of a German anthropologist in the 1920s.

“The discovery of remains at the museum is a highly significant event, in that it shows that the genocide of the Herero and Nama peoples in Namibia in the early part of the 20th century involved not only the mass killing of men, women and children, and the confiscation of their lands and livestock, but also ... the desecration of their remains when literally hundreds of skulls and skeletons were carted off to Berlin by German scientists and researchers,” Katuuo said.

Berlin annexed a new colony on the south-west coast of the continent in the 1880s as part of the broader “scramble for Africa” among western imperialist powers. The Herero people – also called the Ovaherero – were subjected to racially motivated violence, rape and murder and rebelled in January 1904. More than 100 German civilians were killed. The smaller Nama tribe joined the uprising the following year.

Lothar von Trotha, the German general sent to quell the revolt, ordered his men to shoot “any Herero, with or without a rifle, with or without cattle”, including women and children. The order was rescinded, but other measures were employed that were equally lethal. Tens of thousands were forced into desert regions where wells were deliberately poisoned and livestock killed.

Survivors were sent to concentration camps, where they were beaten and worked to death in squalid conditions. Half of the Nama population were also killed. The total death toll is thought to have exceeded 100,000.

The remains found in the AMNH were originally collected by Professor Felix von Luschan, a German anthropologist who believed that their shape revealed the characteristics of an individual or “race”.

The killings in Germany’s African colonies are seen by some historians as important steps towards the Holocaust in Europe during the second world war.

Until recently, the episode had been largely forgotten in Germany, but there are now moves under way to atone for the massacres with reparations.

German officials rejected the use of the word “genocide” to describe the killings of the Herero and Namaqua until July 2015, when the Social Democrat foreign minister, Frank-Walter Steinmeier, issued a “political guideline” indicating that the massacre should be referred to as “a war crime and a genocide”.

A class action lawsuit filed by representatives of the Herero and Nama peoples in New York demands that their representatives be included in negotiations between the government of Namibia and Berlin over reparations.

Berlin has repeatedly refused to pay direct reparations, saying that its development aid worth hundreds of millions of euros since Namibia’s independence from South Africa in 1990 was “for the benefit of all Namibians”.

Source: The Guardian - by  Jason Burke