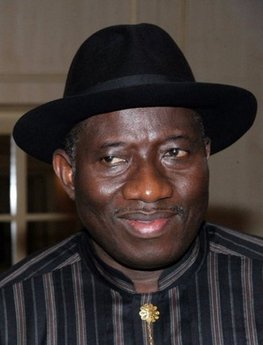 Nigeria's Vice President Goodluck Jonathan took office as acting head-of-state on Tuesday after parliament voted to force ailing President Umaru Yar'Adua to hand over until he is well enough to return.

Jonathan accepted the post hours after the vote, saying in a speech broadcast nationwide: "The circumstances in which I find myself assuming office today as acting president of our country are uncommon, sober and reflective."

Nigeria's Vice President Goodluck Jonathan took office as acting head-of-state on Tuesday after parliament voted to force ailing President Umaru Yar'Adua to hand over until he is well enough to return.

Jonathan accepted the post hours after the vote, saying in a speech broadcast nationwide: "The circumstances in which I find myself assuming office today as acting president of our country are uncommon, sober and reflective."

Parliament's decision sent a powerful political message to Yar'Adua's supporters but heightened political turmoil in Africa's most populous country, which had been without an active president for over two months.

Amid warnings the instability was dangerous in a country with a history of military takeovers, Jonathan commended the security services for "their loyalty and devotion to duty during this trying period".

"I am deeply humbled and honoured by this great call to duty," he said.

Yar'Adua has been in hospital in Saudi Arabia since November 23 with a serious heart condition and critics say crucial government business is being left unattended.

The Senate, in its motion, said that Jonathan was to immediately start discharging "the functions of the office of president, commander in chief of the armed forces of the federation, as acting president."

Nigeria's constitution says the vice president can assume full executive powers when a president formally informs parliament of his absence from office.

As Yar'Adua had not written to the legislature to allow the handover, the Senate said it based its decision on a January 12 BBC interview with the president saying he would return to work once his doctors cleared him.

The Senate said Jonathan would cede the powers once Yar'Adua informed the parliament of his return from "medical vacation".

In its resolution, the lower house of parliament said in the interests of "peace, order and good governance" the vice president "shall assume full presidential powers as acting president, pending the return of the president."

But there was criticism from the main opposition Action Congress which called Tuesday's votes by the two houses of parliament illegal.

"What has happened today has taken Nigeria closer to the abyss, instead of bringing it back from the brink. All hell has broken loose," the party said in a statement.

Constitutional lawyer Festus Keyamo commented: "What they have done amounts to a coup plot. It is a desperate decision by desperate politicians who were trying to save their face."

However another opposition coalition, the Conference of Nigerian Political Parties, said the votes were a first move to ending "the constitutional crisis and power vacuum impasse".

University of Ibadan political scientist Bayo Okunade also welcomed the lawmakers' action. "Their decision is a pre-emptive action to prevent a military take-over," he said.

Part of the political battle is the delicate regional balancing act in Nigeria: Yar'Adua is from the Muslim north and Jonathan from the Christian south.

The presidency traditionally switches between the two sides at every election.

International concerns were highlighted Tuesday by a top US envoy who urged, after a meeting with Jonathan, a democratic transition of power.

In "this period of uncertainty we believe that it is very important that if indeed there is a transition of political power in Nigeria let it be done democratically," US Assistant Secretary of State for Africa Johnny Carson said.

A delegation of lawmakers is to meet Yar'Adua in Saudi Arabia on Wednesday to determine his fitness.