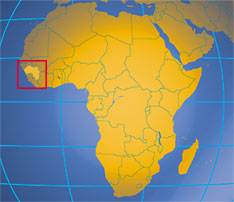 Deep within the forest region of Guinea, a tall, charred tree trunk stands at the edge ofthis village. A year ago, after a toddler became ill and death began to spread from home to home, villagers learned that the bats in that very tree were likely the reason they had become sick.

So eventually they took dry leaves and grass, set them afire and watched as the flames engulfed the trunk. The bats dropped to the ground, dead. But it was too late to prevent what would become the worst Ebola crisis on record.

Deep within the forest region of Guinea, a tall, charred tree trunk stands at the edge ofthis village. A year ago, after a toddler became ill and death began to spread from home to home, villagers learned that the bats in that very tree were likely the reason they had become sick.

So eventually they took dry leaves and grass, set them afire and watched as the flames engulfed the trunk. The bats dropped to the ground, dead. But it was too late to prevent what would become the worst Ebola crisis on record.

A year after the Ebola epidemic started here, Guinea hopes it is finally close to extinguishing the outbreak. Government officials say their goal is to wipe out the disease within 60 days, through the diligent tracing of anyone who has come into contact with an Ebola patient. But health experts warn that Guinea may face a far harder time eliminating the disease than did its neighbors because of its geographic size, its large population — bigger than that of Liberia and Sierra Leone combined — and a public that has resisted the message that Ebola is real.

“We are very wary about the whole situation throughout the country,” said Benjamin Dahl, an epidemiologist leading the response for the U.S. Centers for Disease Control and Prevention in Guinea. “So every case is really of concern.”

Guinea did not experience the dramatic surges in Ebola cases that occurred in neighboring countries, which have suffered higher death tolls. Instead, Ebola has smoldered here, first appearing in the forest region and, later, slowly spreading to other areas of the country. Guinea has also received less international attention than its ailing neighbors.

“They talk about Sierra Leone. They talk about Liberia. But they forgot about us,” said Cécé Kpoghomore, 45, who heads the village school in Meliandou. “Ebola started here, but Ebola never ended here.”

For most of January, Liberia and Sierra Leone reported clear downward trends in Ebola cases, although these numbers increased in the past week. In Guinea, the figures have teetered back and forth. In mid-January, officials reported only 20 new cases, the lowest weekly number since August. It was a sign, many believed, that the country had finally turned the corner. But the number of new cases rose to 30 the following week and 39 the week after, according to World Health Organization data. More than 1,900 people in Guinea have died since Ebola emerged at the end of 2013.

“There are very much common challenges in all of the three countries,” said Marie-Paule Kieny, an assistant director general at the WHO. She visited Guinea in late January. “But what is unique about Guinea is that it has continued for longer — but never to the same level of the other two countries,” she said.

There are various reasons that Ebola has proved so difficult to stamp out in Guinea. Health officials warn that the danger posed by the disease never quite resonated in the capital, Conakry, a city of about 1.8 million, as it did in the capitals of Liberia and Sierra Leone, where case totals spiked much higher and people were dying outside of treatment centers.

Recently, a group of young men drove a car through Conakry, honking the horn and shouting, “Ebola does not kill!” Residents continue to hug, kiss and shake hands freely, seemingly oblivious to the risk of spreading the disease, which is transmitted by bodily fluids.

“In Liberia, no one shakes hands,” said Sean Casey, regional director for the Ebola emergency response of the International Medical Corps, an aid group. “Something changed in Liberia, and it didn’t change here.”

Dahl, of the CDC, said medical professionals had always feared that Conakry “could become the next Monrovia or Freetown,” referring to the capitals of Liberia and Sierra Leone, respectively. He said that that fear has not gone away, largely because cases rose in January in towns just a few hours from Conakry.
Resistance to assistance

Many health workers say that there has been more resistance in Guinea to anti-Ebola campaigns than in other countries. In September, eight people were killed with machetes and stones in the village of Womey when they arrived as part of a “sensitization” campaign about Ebola. Last month on the outskirts of Conakry, residents attacked a team trying to identify the contacts of an Ebola patient. WHO data showed that during one recent week, residents of 27 towns in Guinea resisted Ebola-eradication efforts. Liberia and Sierra Leone reported just two and four districts, respectively, experiencing such resistance.

Looking back, officials and health workers in Guinea theorize that some of the initial messaging in the Ebola crisis may have been counterproductive. The messages focused on the killer nature of the disease, which instilled fear in people and discouraged those who were infected from leaving their homes, they say.

“It was the communication. Saying to people that Ebola is a disease you cannot cure, and that as soon as you have it, you die .?.?. so people in the villages said, ‘OK, if it’s sure that I’m going to die, why should I go to the hospital?’ ” said Damantang Albert Camara, the Guinean employment minister.

The U.S. ambassador to Guinea, Alex Laskaris, has gone out with Ebola response teams trying to encourage steps such as disinfecting with chlorine. On a recent visit to Coyah, a town not far from Conakry, he asked to be sprayed down with a chlorine solution to show villagers that it was harmless.

“I may have smelled like the pool at the YMCA, but that’s okay,” he said.

Laskaris said he considers the widespread lack of awareness about the disease to be more troubling than the few instances of violence against health workers.

“Everyone is focused on resistance and opposition” to Ebola programs, Laskaris said. “But indifference is just as big of a problem.”

Guinea’s government is one of the poorest in the world, with few resources to combat the disease. Laskaris noted that the country is roughly the size of Oregon and has about the population of Ohio, roughly 12 million. But the government has a smaller budget — $1.4 billion — than the public school system in Montgomery County, Md.

Guinea, a former colony of France, has primarily relied upon French support to combat the disease.

“Right now, more countries are coming to help us. But at the beginning of the epidemic, it was only France for a long time,” said Camara, the minister, who also acts as a government spokesman.

In January, Guinea’s national Ebola coordination committee announced a campaign to stamp out Ebola. But its T-shirts, which say “Zero Ebola in 60 Days,” lack reference to a starting or ending date for this goal. The omission may be for good reason. The government’s previous end-of-Ebola deadline was in December.

“It was, how do you say it, wishful thinking,” said Camara.

As ground zero of the epidemic, the tree in Meliandou has attracted the attention of scientists and anthropologists. They believe that in December 2013, a young boy named Émile Ouamouno contracted the disease from a colony of free-tailed bats that lived in the tree.

His death, followed in quick succession by about 14 others in the village and more in nearby Guéckédou, prompted a frenzy about the mysterious illness. Villagers sold rice, goats, sheep and chickens to pay for a traditional healer to cleanse Meliandou.

But after the ceremony, “people were still dying,” said Gabriel Kamano, 28.

Before the epidemic, the village was known for its cultivation of coffee, palm nuts and rice. Now, it is famous as the origin of an outbreak that has scarred West Africa. The population has dropped from 600 to 400 as residents have fled. There is no one left to staff the health clinic. Kpoghomore, the school director, has one thermometer but no batteries to power it.

Ebola has been gone from Meliandou since last spring. But like many across Guinea, villagers say they are uncertain about when and how the country will finally end the outbreak.

“The most important thing for us is that Ebola can never, ever come back to Meliandou,” said Kpoghomore.