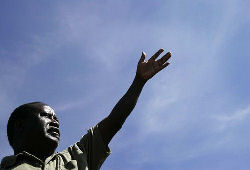 A year ago, opposition leader Raila Odinga hit the streets to protest a flawed presidential election that sparked the deadliest political standoff in Kenya's post-independence history.

Prime Minister Raila Odinga says, âKenyans have discovered the power of the people, that if they unite and make some demands, they are able to get what they want.' - Ben Curtis, Associated Press

A year ago, opposition leader Raila Odinga hit the streets to protest a flawed presidential election that sparked the deadliest political standoff in Kenya's post-independence history.

Street demonstrations led to riots and then ethnic clashes that spread across this East African nation, killing more than 1,000 people and leaving another 350,000 homeless.

It wasn't the first time Odinga had to fight to be heard. The son of a prominent, though marginalized, political family, Odinga says he's been tear-gassed so many times over the years that he suffers from permanent eye damage.

Odinga doesn't have to run through the streets anymore. Today he is Kenya's prime minister under a power-sharing agreement with his rival, President Mwai Kibaki.

In a short time, he's established himself as one of Africa's most-outspoken statesmen. When African Union leaders refused to support sanctions against Zimbabwean President Robert Mugabe last month, Odinga called on him to resign.

But progress to repair Kenya's political institutions and social fabric has been slow and some worry Odinga is neglecting his promised reforms. In an interview last week with The Times in the coastal resort of Diani Beach, Odinga spoke about the legacy of last year's violence, why reforms haven't moved faster, the difficulties in sharing power with his former rival and how the election of President-elect Barack Obama will affect U.S.-Kenyan relations.

Question: A year after the post-election violence, would you say Kenya has changed as a nation?

Answer: The country has changed fundamentally. There was a pretense that Kenya was a united country. That facade was removed by the crisis when Kenyans showed that it is a divided country, torn along ethnic lines. The crisis has helped Kenyans rediscover themselves. And Kenyans have discovered the power of the people, that if they unite and make some demands, they are able to get what they want.

Q: More than 1,000 people died. Looking back, what do you think they died for?

A: In the history of any country, a time comes when the people cannot tolerate political dictatorship and they rise up to resist forcibly. Many countries have gone through this. America could not tolerate British colonialism. Kenyans rose against the British too. The deaths are the consequences of the people's revolution. It's unfortunate, but people were not willing to accept election-rigging.

Q: Do you wish you had done more to try to stop the violence?

A: I don't think it was in our power to stop what happened. Election-rigging was the trigger that set in motion a chain reaction [of grievances] dealing with unresolved disputes and historical injustices that had been simmering for many years. Some people took advantage of the situation to settle those disputes.

Also there was state-sponsored terrorism. The shoot-to-kill orders by the police were responsible for more than 50% of the deaths. We could not have prevented those. These protests were spontaneous, not organized. We never planned violence because we were confident we would win.

Q: Since becoming prime minister, what are you most proud of?

A: I have been able to institute the authority of the office of the prime minister. This is a new institution that is clawing power from the presidency. I'm trying to create a balance and institute discipline within the civil service. This is not an easy task.

A: Not being able to extend my authority the way I would have liked because of a lack of capacity, lack of resources, personnel and infrastructure. If I had more resources, I could have done much better.

Q: There is an impression that reforms are taking too long. It's taken nearly a year just to get rid of an election commission that nearly everyone agrees did a poor job. Some have questioned whether you are still committed to reform.

A: Things are taking so long because we are running a coalition government. We have brought two partners who were bitter rivals together. First there are fears and suspicions. And you need to appreciate that some of the reforms needed run contrary to the interests of the other coalition partner. When you want to remove the election commission, you need to know that the commission was put in place by the other partner and, to a certain extent, the things they did were on instructions of the other partner. If this were a one-party government, things would move much faster. It's not that we have forgotten the reform agenda. It's that we've had to compromise to accommodate the coalition partner.

Q: How is your relationship with Kibaki?
A: It's fairly positive and cordial. We have weekly meetings in which we compare notes and agree on agendas. We agree most of the time. The problem really is with people you call the president's men, the powers behind the throne. They try to undermine. You find they try to frustrate implementation. There is an office in the civil service that used to be very powerful . . . permanent secretary of the office of the president. That was the [de facto] prime minister, but headed by a civil servant. He's still there.

Q: So you are competing with that office?

A: He's still holding regular meetings with the permanent secretaries [of government ministries] and giving them instructions. These president's men want to be like the prefect for the permanent secretaries who supervise the workings of the government, but that is now the function of the office of the prime minister. Sometimes there is a conflict.

Q: Let's talk about impunity. More than 1,000 people were killed, tens of thousands of homes burned, widespread looting. Yet almost no one has been punished. You've called for amnesty for some perpetrators. But shouldn't there be justice?

A: People who are guilty of serious crimes against humanity need to be punished, irrespective of their positions, then and now. The question has always been who should identify and prosecute. Our view is that law enforcement agencies are compromised. They are themselves implicated. The police commissioner who gave instructions to shoot-to-kill should not be allowed to bring the charges. They are trying to arrest and charge civilians, but they themselves are getting off scot-free. There is this incident where a police officer was captured on TV tracking down innocent civilians and shooting them.

Q: That's one of the only prosecutions of postelection violence I've heard of.

A: His only crime was getting caught on camera. So many others did that kind of killing or worse. In my constituency, one officer shot seven people in a period of a half-hour. That officer was promoted. We are saying there must be an independent body. That's why the Waki Commission, [charged with investigating postelection violence], recommends a tribunal consisting of local and international legal experts to carry out an investigation and prosecution. [NOTE: Kibaki and Odinga have agreed in theory to create such a commission, but it is not yet formed.]

Q: Kenya has a history of appointing special commissions in the aftermath of scandals or violence. Then the government usually ignores their findings. Isn't that a cop-out? Shouldn't the elected officials deal with these issues?

A: Commissions have been a way of diverting attention, rather than resolving issues. And eventually the results are suspended. This is something that unfortunately started with the [Daniel Arap] Moi era and continued with the Kibaki era. It's a bad practice and it helped create impunity after [ethnic clashes in 1992.]

Q: What's the state of democracy in Africa? After flawed elections in Kenya and Zimbabwe, many believe the continent is backsliding.

A: African democracy is on a downward trend. We had made quite a bit of progress after the fall of the Soviet Union. That brought a wind of change across the continent. It brought down military dictators and single-party dictators and in their place came multiparty democracies. This first phase was characterized by perfunctory, superficial changes. New constitutions allowed for multiparty democracies and opposition. But in a number of cases the opposition was unprepared and elections perpetuated the same elite who were in power.

In the next phase, the opposition is gaining strength and threatening the ruling parties. This is a more difficult phase. The culture of relinquishing power is not there yet in Africa. The African Union is impotent to act because the majority of the leadership carries the same baggage as Mugabe.

Q: You found yourself dragged into Obama's campaign. First you were quoted as claiming to be a first cousin. Then Obama opponents lobbed a variety of allegations against you, including that you were communist, Muslim and that you received $1 million from Obama. What was that like?

A: It was so unfortunate. That's the reason I did not attend the Democratic convention in Denver, because of the allegations being made. First, there is no blood relation between me and Barack Obama. My mother comes from his Luo clan, but the clan is very big. A half-million people. And I knew his father. His father was a close friend of mine and of my father's.

On the lies, I'm not Muslim. I'm not communist. And I never received a penny from Barack.

Q: Given Obama's Kenyan roots, do you expect changes in U.S.-Kenyan relations?

A: We don't expect a special relationship with the U.S. on the basis of Obama's biological relationship to Kenya. He's an American president. His duty and loyalty are first and foremost to America. However, we expect, based on the policies he has expounded with regard to Africa, that there's going to be a new page in the U.S.-African relationship which will be mutually beneficial to the two continents. We don't expect any kind of charity from the U.S. But we hope that through Obama, the relationship can be more intimate.

Q: If you had to sum up the next year for Kenya in a word, what would it be?

A: Hope. This is the year of hope and expectations. Last year was preparations. Coming from the turmoil, basically we were just trying to recover. We were still fighting fires. Now that the embers have been extinguished, this is the year we need to do things.
Source: LA Times - By Edmund Sanders