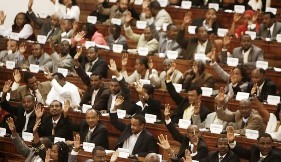 Foreign agencies are prohibited from a number of areas including human rights, equality, conflict resolution and the rights of children. .

Foreign agencies are prohibited from a number of areas including human rights, equality, conflict resolution and the rights of children. .

Local groups that receive more than 10% of their funding from abroad are also banned from working in these areas.

Under discussion for months, the bill has already been considerably modified amid objections from aid organisations.

Parliament approved the legislation on Tuesday - Orthodox Christmas Eve - by 327 votes to 79, according to the AFP news agency, before members headed home for the holiday.

The BBC's Elizabeth Blunt in Addis Ababa says at the heart of the bill and causing the most fuss is a clause aimed at preventing foreign interference in issues which the government believes should be a purely Ethiopian affair.

She says some of the organisations affected, like the Ethiopian Human Rights Council, could be seen as political and have long been a thorn in the government's flesh.

But, she adds, if the law is rigorously applied it could also catch much less controversial groups which are doing valuable work but would never be able to fund their activities from purely local sources.

• The advancement of human and democratic rights

• The promotion of equality between peoples, sexes or religions

• Campaigning for children's rights or the rights of the disabled

The bill's provisions imposing the same restrictions on Ethiopian NGOs which receive more than 10% of their funding from foreign sources will affect many agencies, according to our correspondent.

She says this is because a number of foreign donors prefer to channel their aid through the voluntary sector rather than giving it to the government.

A defence of the bill published by the ruling party described this attitude as a neo-liberalist concept which sees African governments as obstacles to development.

The government denies the bill is intended to restrict aid work.

"Civil organisations will be able to function without hindrances. They won't face restrictions as long as they respect the country's laws," government whip Hailemariam Desalegn said.

But opposition MP Temesgen Zewdie was quoted by AFP as telling MPs before the vote: "As far as we're concerned, it's an attempt by the ruling party to banish all those it sees as a threat to its tight grip on power."

Madhere Paulos director of the Ethiopian Women Lawyers' Association told the BBC that 99% of its funding to provide legal aid to women currently comes from abroad.

She said her members would continue to give up their time for free.

The US government in particular has protested loudly to the Horn of Africa nation about the proposals, but to very little effect, says our correspondent.

Ethiopia is among the world's top aid recipients.