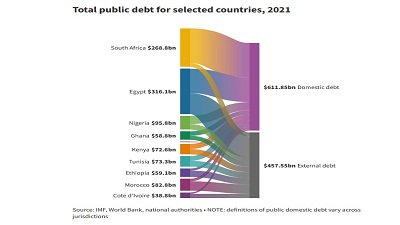 Many African countries spend a high level of their budgets on servicing debt. Are there advantages to sourcing lending domestically?

Many African countries spend a high level of their budgets on servicing debt. Are there advantages to sourcing lending domestically?

The high levels of budget expenditure spent on servicing debt is a big problem for most African countries, especially in the current environment. The cost of foreign denominated debt is rising as the value of African currencies falls against the dollar. Local debt, funded by local banks and domestic savings can help avoid this problem, but it can divert capital away from more productive investment, and also puts the banks at greater risk.

African Business surveyed 10 representative African countries to see how they were dealing with the problem of debt servicing.

Nigeria’s fiscal burden of total interest payments, domestic and external combined, is by far the highest of the 10 African countries surveyed – at 92.6% it was well ahead of Ghana (49.6%) and Egypt (48.4%) . At the same time, at 45.8% it had the third highest capital expenditure as a proportion of total revenue and grants in 2020, after Kenya (53.7%) and Ethiopia (52.6%). This unusual combination might suggest that Nigeria has unsustainable debt metrics.

All 10 countries under our coverage posted budget deficits in 2020 although this was the year when the Covid-19 pandemic struck: revenue naturally slumped and governments around the world were under pressure to mitigate its impact.

The Nigerian government spent a total (current and capital spending, and interest payments) more than three times its revenue inflows in 2020, which shows that it favours an expansionist fiscal stance (and that its revenue collection is pitiful).

It can borrow domestically at manageable interest rates because it can tap demand from a large domestic institutional investor base, led by pension funds and mutuals. This is an advantage shared in varying degrees by South Africa, Côte d’Ivoire, Egypt and Kenya. Last year as much as 90% of South African public debt was domestic. In Nigeria’s case those domestic investors have limited investment alternatives for a combination of regulatory and market reasons.

The Nigerian fiscal stance is not sustainable beyond the short term because domestic rates would at some point become fiscally overwhelming. The exit lies via an elusive boost to revenue collection. At the other extreme, Botswana offers an example of public finances in order, with easily the lowest interest payments of the 10 countries and restrained capital spending.

If a government cannot tap sizeable domestic demand for its debt, the risk is that it goes down the route of depending on central bank borrowing. As for the external choices available, it may be fortunate enough to have good bilateral partners. Egypt and the Gulf states would be an example.

Alternatively, governments can look for budget support from the World Bank and other multilateral agencies at low cost but with lengthy negotiations due in part to policy conditionality. Finally, a decreasing number can issue eurobonds at market rates, which are rising as a consequence of monetary policy normalisation in advanced economies. The funds are disbursed quickly, however.

That continuing normalisation has given rise to several official warnings of increasing debt distress in emerging economies. In January the World Bank warned that 60% of low-income countries needed to restructure their debt obligations or were close to the point of restructuring. A handful of countries have defaulted on their external debts during the continuing sequence of acute negatives (the pandemic, the war in Ukraine and the monetary tightening in G7).

None of the 10 countries surveyed seem likely to encounter the same problems with debt as Mozambique or Zambia in a hurry. These two cases arose because external debt payments were unmanageable. The external resources to meet external debt obligations did not exist. In Mozambique’s case, some obligations were withheld from official data. (We focus on external debt defaults because such are uncommon on domestic obligations, an exception being Russia in 1998.)

World Bank data for 2020 show the ratio of external debt service to total exports as below 30% for all 10 countries, ranging from 4% for Botswana to 29% for Egypt and South Africa.

The eurobond market serves as a decent take on sustainability. Recent months have seen wobbles on sovereign issuance out of Ghana and Kenya at the short end of the curve. In Ghana’s case the wobble was driven by a familiar twin deficit, depletion of reserves, a ratings downgrade by Moody’s, resistance in the market to refinancing of its eurobond maturities and the government’s said determination to address its macro difficulties with home grown solutions rather than another IMF programme.

Pressure in the market has eased somewhat since the authorities changed tack and resolved to seek an agreement with the IMF. Because Ghana has limited domestic financing possibilities, it must turn to external markets and accept the resulting scrutiny (from investors) and conditionality (from multilateral agencies). Ethiopia is a similar story and has fewer possibilities than Ghana.

The tightening of external financing conditions in the market is adding to costs and often denying access to borrowing as investor criteria become more stringent. It therefore becomes a greater advantage to have a base of domestic institutional demand for issuance. The advantage is not in any way developmental and our argument does not endorse, for example, Nigerian fiscal policy: it is merely that the governments in question are better placed to cover their budget deficits.

As a statistical footnote, it must be said that the data for public domestic debt has several flaws, both definitional and due to limitations of coverage. Central government differs from general government debt, and a federal system produces additional complications. Central bank obligations may or may not be incorporated.

Gregory has more than 40 years' experience in banking, publishing and forecasting on Africa in research. In this period he has worked at Grindlays Bank, the Economist Intelligence Unit, West LB, Commerzbank, Trusted Sources, CSL Stockbrokers and FBNQuest Capital prior to his current role.