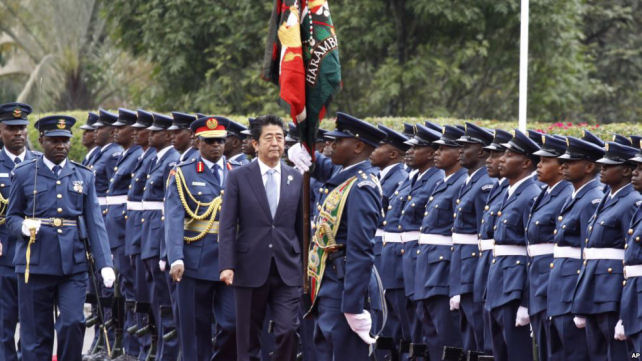 African heads of state and VIPs from around the world have converged in this Kenyan capital for the sixth Tokyo International Conference on African Development, expected to foster a host of new trade and investment deals.

African heads of state and VIPs from around the world have converged in this Kenyan capital for the sixth Tokyo International Conference on African Development, expected to foster a host of new trade and investment deals.

For the first time since its 1993 inception, the summit — now held every three years — is being held in Africa. It’s an historic occasion, Japanese Prime Minister Shinzo Abe told reporters here Friday.

He said Japan would work hand in hand with Africa to realize the goals set out by the continent’s people, whom he said were strongly promoting themselves.

Japan’s government, along with the World Bank, the United Nations and the African Union, host the TICAD summit. It’s billed as a platform for high-level dialogue on policy.

The list of attendees is full of VIPs, including 37 African heads of state and the leaders of the World Bank and the African Development Bank, to name a few. The two-day conference, which concludes Saturday, has drawn approximately 10,000 delegates.

Lagging industrialization in Africa is on the agenda.

"We know that most nations which escape the grip of poverty do so by industrializing," Kenya’s President Uhuru Kenyatta said Friday. "Africa has not still lived up to its potential. We need to put our heads together to see how we can hasten the industrialization of the continent and how we can avoid the missteps of those who have previously walked this path."

The Japanese prime minister said his country would unveil new technology and training opportunities at the conference to encourage growth.

At the last TICAD in 2013, Japan pledged $32 billion in development aid to Africa. Some of it was earmarked for infrastructure development to encourage foreign investment.

Japan is currently undertaking an expansion of the Kenyan port of Mombasa, to the tune of $250 million.

"The Japanese have been heavily involved … here in our ports in Mombasa, in Mozambique," Kenyan economic analyst Aly Khan Satchu told VOA. "They are doing a lot of the roads. They seem to meet a strategy basically around logistics and opening up the continent, and I think that’s going to work well for them."

Duncan Onduu, a Nairobi-based sustainable development analyst, said he expected hot topics to include climate change and agriculture investment. He anticipates "greater commitment on issues of climate change, issues of food security" and helping Africans become more self-reliant "so that we don’t have instances where there are pockets of hunger."