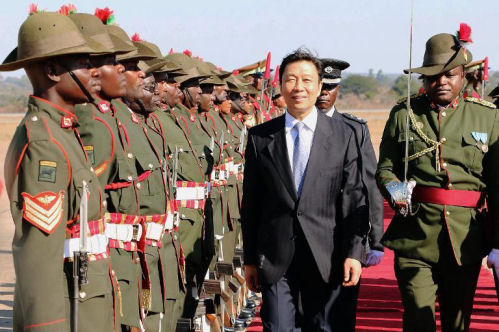 Li and his Zambian counterpart Guy Scott signed a $32 million interest-free loan and a grant of similar value for economic and technical aid.

Chinese Vice President Li Yuanchao upon his arrival at the Kenneth Kaunda International Airport on June 18, 2014 in Lusaka (AFP/Joseph Mwenda)

Li and his Zambian counterpart Guy Scott signed a $32 million interest-free loan and a grant of similar value for economic and technical aid.

Zambia will use the funds to improve its water reticulation system in rural areas, upgrade the country's only international airport in Lusaka and improve education facilities, among a raft of other projects.

Local media reported that eight agreements would be penned during Li's visit.

China is Zambia's top foreign investor, but relations have occasionally been tense because of China's preponderant presence in Africa's copper giant.

A Chinese manager was killed during a 2012 riot over wages at a coal mine.

Besides their involvement in copper and coal mining, Chinese companies are building roads and revamping Zambia's international airport and stadiums.

On Thursday Li will hold on talks with President Michael Sata, who as an opposition leader railed against the growing Chinese presence in Zambia.

Sata has however softened his tone since coming to power in 2011 after realising the importance of Chinese investment to the Zambian economy.

"China's insatiable demand for Zambia's natural resources along with its willingness to grow jobs and fund vital infrastructure projects have meant that the (ruling) PF (Patriotic Front) has strengthened economic and diplomatic links since coming to office," said risk analyst Charles Laurie of London-based Maplecroft.

China's ambassador to Zambia, Zhou Yuxiao, said the trip is aimed at further boosting "government-to-government and party-to-party relations between our two countries."

Scott announced at the signing ceremony that Zambia would give China 200 hectares (500 acres) of land to be developed into a memorial burial site for 64 Chinese workers who died during the construction of the Tanzania Zambia Railways (TAZARA) between 1970 and 1975.

The 1,860-kilometre (1,150-mile) railway line -- one of China's most ambitious projects in Africa -- runs from Tanzania's major seaport of Dar es Salaam to the heart of Zambia's copper belt.

Li, who is accompanied by 21 businessmen and Communist Party officials, is also expected to meet senior Patriotic Front officials before flying out of the country on Saturday.