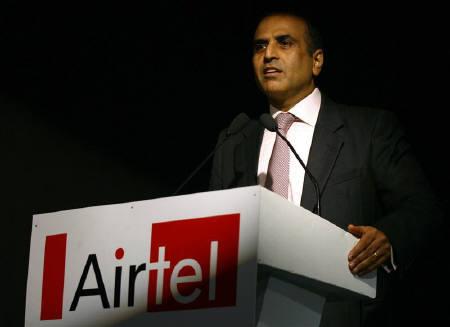 Millions of mobile phone subscribers in Africa saw the icon on their phone screens change from Bahrain company Zain to Indian company Airtel last fall. The change means little to the average customer, but for the continent, it's another sign that India is moving in.

The expansion by Bharti Airtel into 16 African countries underscores the rise of India in Africa, at a time when much of the focus on foreign investment here has been on China.

Millions of mobile phone subscribers in Africa saw the icon on their phone screens change from Bahrain company Zain to Indian company Airtel last fall. The change means little to the average customer, but for the continent, it's another sign that India is moving in.

The expansion by Bharti Airtel into 16 African countries underscores the rise of India in Africa, at a time when much of the focus on foreign investment here has been on China.

The Indian government is raising its diplomatic profile in Africa, with Prime Minister Manmohan Singh and his Cabinet leading several business delegations in recent years. And Indian companies are striving to keep up with China's business profile in Africa, taking advantage of historical ties with the continent.

"I think one of the things that India doesn't want to allow to happen is that it doesn't want to get behind in this kind of engagement," said Sanusha Naidu, research director at the Britain-based Fahamu organization, an advocacy group tracking African issues.

Naidu said India's renewed interest in Africa has not received as much attention as China's because India is not seen as a threat.

"It is seen as a democratic state," Naidu, a South African, said. "It doesn't have a communist regime. All that plays in favor of India."

India and China are vying for Africa because of the bottom line: Africa represents new growth.

"This is the last growth continent in the world. Europe is a done industry. The U.S. is a done industry. Southeast Asia is old," said Sunil Mittal, founder and chairman of Bharti Airtel. "Our model is not suitable for a matured market. We need growth and Africa is the right place to grow."

The relations between India and Africa are centuries old. In the 1960s and 1970s, India helped newly independent African states by training them at Indian universities and other institutions. Indian conglomerates such as the Tata Group have had a presence in Africa for decades.

But India is now changing its relationship with Africa from the political, such as advocating an end to colonialism, to the economic. In recent years, some Indian companies have expanded their business in Africa, propelling what were once small operations into major players. New companies have also moved in. Among them are:

• In 2005, Karuturi Global, an Indian agriculture company, bought 15 hectares in Ethiopia to grow roses for export, an investment of about $1.9 million. Karuturi has since grown that investment to have 75 hectares of roses. In 2007, it bought one of the largest flower farms in Kenya, in a deal valued at about $65.5 million. In the past two years, Karuturi has acquired another 311,700 hectares in Ethiopia for an undisclosed amount of money.

• Indian drug companies Cipla and Ranbaxy have been a lifeline for years for millions of Africans who are HIV-positive, because they produce far cheaper generic anti-retroviral drugs than the branded drugs from European and American companies.

Along with business, India is playing a philanthropic role in Africa, while at the same time raising its profile. During a summit with African leaders in April 2008, India pledged more than $500 million in grants for development projects. It also pledged to increase by more than $2 billion its lines of credit to African countries and regional economic groups.

The summit was India's first with African leaders. However, China has held three such summits since 2003, where it has pledged loans and infrastructure projects much bigger than what India has promised. In its most recent summit in November 2009, China pledged $10 billion in loans over a three-year period.

In October, India's Commerce and Industry Minister Anand Sharma led a trade mission to East Africa. He said India is exploring whether African farmers can be encouraged to grow legumes and export them to India, the world's largest market for legumes.

"I think at this time India is taking off in terms of industrialization, so definitely they are looking for a market," said Jacob Mignouna, the technical director at the Nairobi-based research organization the African Agricultural Technology Foundation. "Of course there may be some philanthropic aspect of it, but the bottom line is, they are looking for trade, for opportunities also for the Indian industries."

The close relationship between India and China is reflected in trade. Between April and July 2010, India exported $4.8 billion worth of goods to Africa — a 51 percent increase from the same period in 2009. India imported about $7.8 billion worth of goods from Africa between April and July 2010, a 40.7 percent increase from the previous year.

The Bharti Airtel investment in Africa is so far one of the biggest from corporate India. Last year, Bharti Airtel, India's largest mobile phone company, tried and failed to acquire South Africa's MTN, one of the continent's largest communication companies.

Africa for its part needs to look more critically at its developing relationship with India, Naidu warned.

"Is it (Africa) gaining technical experience? Is it gaining development experience? We need to interrogate the relationship much more clearly," said Naidu. "I think we need to ask those questions where if Africa is not gaining out of this relationship, then what needs to be done?"