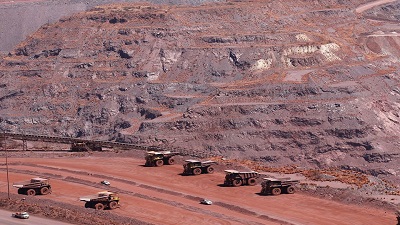 Kumba's shares were 1.46% lower at 0844 GMT on Tuesday after it reported a 50% decline in half-year profit, mainly due to lower iron ore prices and rising fuel and freight costs.

China is the world's top producer of steel, which is made using iron ore mostly for real estate and infrastructure. Chinese policymakers have pledged to boost infrastructure spending to revive the world's second-biggest economy after it slowed sharply in the second quarter, hit by strict COVID-19 containment measures and a distressed property market.

"There's a significant stimulus that’s being provided by the Chinese authorities. We expect that to have an effect on iron ore demand. It is all about China in the iron ore market, so you would expect some support to come on that Chinese stimulus," Timo Smit, Kumba's executive head of marketing, said during a results call.

First-half production at Kumba's two mines declined 13% to 17.8 million tonnes, largely due to heavy rains that impacted mining operations in the Northern Cape in the first quarter.

These operating challenges were worsened by supply chain disruptions and rising costs, partly due to the conflict in Ukraine, weaker steel demand after COVID-19 lockdowns in China and a softer global economic outlook, Kumba said in a statement.

Kumba, which is 70% owned by Anglo American Plc (AAL.L), declared an interim dividend of 28.70 rand.