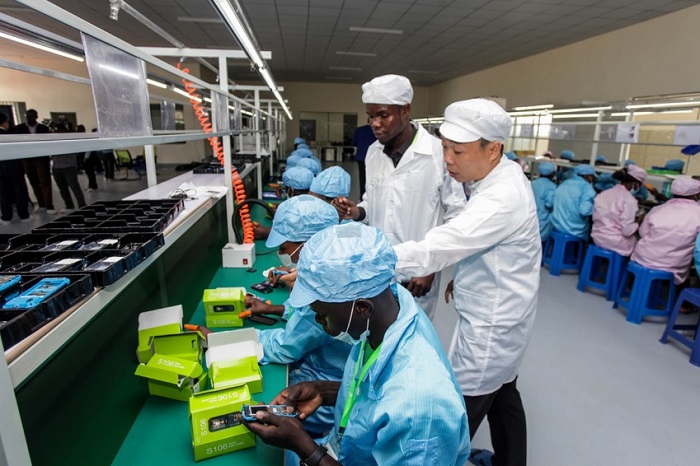 As the Biden administration works out its China policy priorities, tensions between the two countries continue to rise. Most recently, these tensions have focused on trade competition, military and security concerns — especially around the South China Sea and Taiwan — and on human rights issues involving crackdowns in Xinjiang and Hong Kong.

A technician from a mobile product and service provider based in Shenzhen, Guangdong province, helps local employees at an industrial park in Uganda assemble mobile phones. [Photo/Xinhua]

As the Biden administration works out its China policy priorities, tensions between the two countries continue to rise. Most recently, these tensions have focused on trade competition, military and security concerns — especially around the South China Sea and Taiwan — and on human rights issues involving crackdowns in Xinjiang and Hong Kong.

U.S.-China tensions extend at times into Africa, centered on China’s military base in Djibouti, competition around responses to the coronavirus, and Chinese loans and investments. Some U.S. lawmakers have proposed new legislation aimed at countering China globally — by boosting U.S. economic engagement. The Strategic Competition Act of 2021, for instance, includes a section on sub-Saharan Africa.

But can the U.S. compete with Chinese firms in Africa?

The data suggests that Chinese involvement in Africa, particularly private Chinese investment, is yielding significant benefits. Our recent research examined Chinese investments in manufacturing, agro-processing, telecommunication and infrastructure projects in seven African countries. We found clear evidence of job creation, linkages to local suppliers and buyers, local subcontracting and even local copycat activities across sectors ranging from cotton and leather processing to railroad construction and operations and plastic waste recycling. In all seven countries, Chinese investments are having a net positive economic impact.

From 2015 through 2019, our team of researchers sought to understand the impacts of Chinese investments on structural transformation in Africa, especially in terms of job creation, skills and technology transfer, and local business development. We used surveys, case studies and mapping exercises in Ethiopia, Kenya, Malawi, Madagascar, Nigeria, Tanzania and Zambia. The team looked at manufacturing and agriculture across these seven countries, and then carried out more focused case studies on the cotton and leather industries in Ethiopia and Zambia, and plastic waste recycling in Tanzania.

We found that the majority of Chinese firms operating in Africa’s manufacturing and agriculture sectors were private, run by Chinese entrepreneurs looking for business opportunities outside of China. Very few of these firms received any financial incentives from the Chinese government. Many of these small investment projects were not listed in official records in either Chinese databases or African business registries. Factors such as small size, company name changes, inaccurate registrations and frequent business closures allowed many to go unnoticed.

Managers of Chinese businesses we surveyed indicated that they chose to invest in Africa primarily on market considerations, including cheap labor, an abundant supply of raw materials and strong market potential. We also found evidence of wider investment linkages: Chinese working in Africa helped attract more Chinese investors from their families, villages and business networks.

Interviews also revealed the Chinese government and funders had a very limited role in these operations, beyond overall trade and tariffs agreements. Government policies within each of these seven countries set the rules around importing parts or supplies required for manufacturing and exporting finished projects, as well as the establishment of special economic zones, where foreign companies operate by government invitation, and enjoy investment incentives and tax breaks.

In Ethiopia, Kenya, Tanzania and Nigeria, we found that the majority of Chinese investments were in small and medium-size businesses employing fewer than 200 workers. A small number of investments (in garment and building materials) employed more than 500 to 1,000 workers.

Chinese businesses in Ethiopia provided ample evidence of both job creation and transfer of jobs from Chinese to local employees. In the garment sector, Chinese firms employed 4,395 Ethiopians and 110 expatriates. The leather sector created 11,830 jobs for locals and 440 positions for expatriates. In the plastics sector, Chinese companies created 3,061 local jobs and 150 expatriate positions. Researchers found similarly high ratios of local to expatriate jobs in both the textile sector and in cement and gypsum factories. Chinese firms seem to have learned that companies that hired locally were better prepared to weather business challenges.

China Africa Research Initiative researchers found evidence of training, subcontracting, and linkages to local suppliers and buyers. Chinese firms were (and are) engaged in various training activities. Most of these were “learning-by-doing” through on-site and on-the-job training. While limited, we also identified a few large, formal training programs; some in-class, videotaped sessions; limited training in China; and limited collaboration with African vocational training centers.

CARI researchers also identified instances of learning between Chinese and African firms involved in supplier-buyer relationships. For example, Chinese firms worked with local suppliers for primary products, including leather, stone, wood and recycled material, often passing on information about quality control. But some interviewees explained that local low-level processing capacity made it a challenge to source high-quality supplies, so they remained dependent on supplies and equipment from other Chinese firms.

The CARI research found that limited transfer of technology was taking place. Low-level technologies and equipment tend to be more freely shared. For example, in Tanzania’s plastic recycling industry, researchers identified Chinese factories that had sold their used shredding and washing machines to local entrepreneurs. The Chinese firms offered this equipment at cut prices, making installment plans available to former employees or suppliers, and thus encouraged local entrepreneurship in the growing sector.

Given that most Chinese manufacturing investments in these countries were established after 2010, continued research efforts would help analyze the longer-term impacts of transfers of technology. Such research could include the longer-term implications of Chinese labor practices for the local business climate, as well as the environmental impacts of these enterprises.

That said, there is clear evidence that Chinese investments in manufacturing and agriculture are having positive effects on job creation and linkages to local African suppliers, buyers, subcontractors and entrepreneurial activities. Of course, these aren’t the high-profile megaprojects that feature prominently in news reports. But African governments are taking note of the positive impacts on business development — which suggests U.S. efforts to understand China’s role in Africa and support a broader U.S. business presence in African countries may mean paying closer attention to the positive impacts of these types of private Chinese investments.

Editor’s note: Be sure to check out our new series exploring Chinese investment in Africa, along with activities related to debt relief, infrastructure and other critical issues across the continent. See below for the contributions from the Johns Hopkins School of Advanced International Studies China Africa Research Initiative (SAIS-CARI) workshop; new articles will be added as they are published.