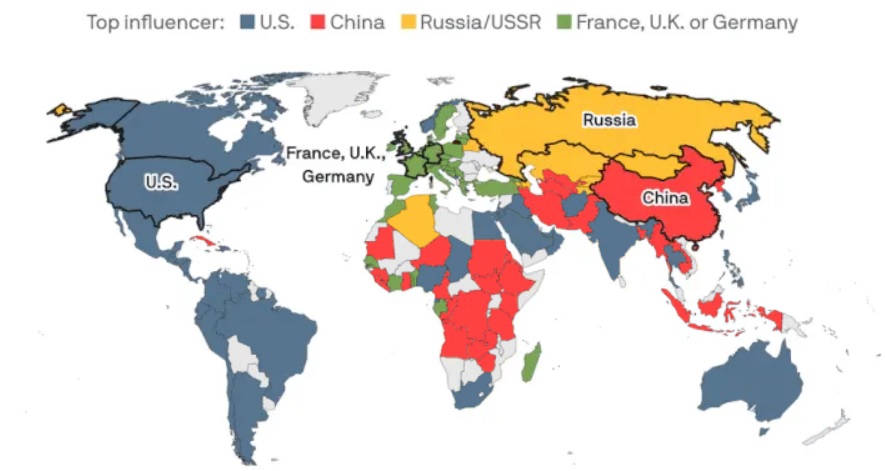 As of 1980, China was the most influential player in just one country: Albania. Now, China is the leading power across most of sub-Saharan Africa and Southeast Asia and is catching up to the U.S. in its own hemisphere.

As of 1980, China was the most influential player in just one country: Albania. Now, China is the leading power across most of sub-Saharan Africa and Southeast Asia and is catching up to the U.S. in its own hemisphere.

What we’re reading: That's according to a new report from the University of Denver and the Atlantic Council that seeks to measure the influence countries have on each other, and in so doing offers a dramatic portrait of China's rise.

The authors took the quantifiable aspects of two countries’ trade, security and diplomatic relationships (the value of goods traded, aid provided, arms transferred, etc.) and then looked at the balance in terms of how dependent one country was on another.

They note that some aspects of influence — the funding of proxy forces, say, or the strength of cultural influences — aren’t captured in this data.

What they do capture is a clear trend over the last three decades: America’s global influence has stagnated, Europe’s has waned, and China’s has rapidly expanded.

Breaking it down: Even in 2000, China ranked as most influential in only a handful of otherwise isolated states like Iran, Myanmar and Sudan. But in the early 2000s, China's influence surged as its economy expanded.

“The way influence works in the international system now is often not focused primarily on military influence, though that remains important,” Jonathan Moyer, one of the report’s co-authors, tells Axios.

It's China’s role at the center of global trade that generates the bulk of its influence.

The trend: The acceleration of China’s influence has slowed in recent years, but there's room to grow in the security sphere, particularly through weapons sales, Moyer says.

America’s shift toward protectionism is making it less competitive with China, says Mathew Burrows, another co-author. “The U.S. has bowed out from big regional trade agreements, and that has basically tilted the balance toward China."

State of play: The U.S. remains the most influential power in some 50 countries versus 34 for China, according to the study, including in nearly all of Latin America and in economic heavyweights like India, Japan, Saudi Arabia and Australia.

But based on the current trajectory, the map could look very different in 2040.

What to watch: The Biden administration has made an early push to engage with Southeast Asia, where the report finds that U.S. and Chinese influence is closely balanced in several countries, including Indonesia, Malaysia, Thailand and Vietnam.

Worth noting: To simplify our map, we colored countries for which the most influential power was France, Germany or the U.K. all as green.