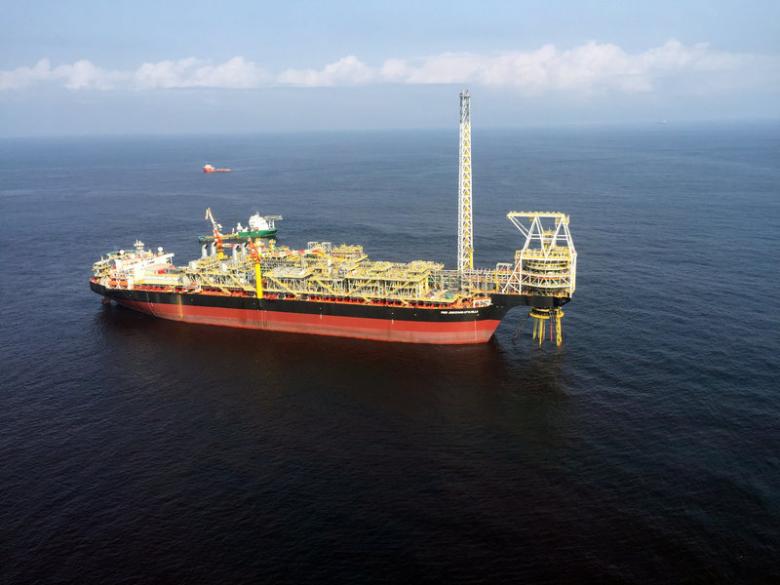 The oil ship moored off the coast of the port of Takoradi, Ghana, July 14, 2016. (Photo/REUTERS/Matthew Mpoke Bigg)

The Tweneboa, Enyenra and Ntomme (TEN) field expects to average around 23,000 barrels per day (bpd) in 2016, eventually reaching 80,000 bpd along with associated gas to be harnessed to ease a domestic power deficit.

"Current setbacks in the world (oil) market are temporary and we'll see a recovery soon that will give a fair price to producers," Mahama said as he opened the valve. "Its been a long journey but a fruitful one."

TEN, with estimated reserves of 240 million barrels of oil and associated gas of 60 million barrels equivalent, is Ghana's second oilfield after the country's flagship Jubilee project, also operated by Tullow, which began in late 2010.

The revenue from TEN is significantly less than was first anticipated when the country launched the project in 2013, owing to the slump in world oil prices..

"It (revenue from TEN) will ... provide a stronger financial security for our debt servicing arrangements going forward and enhance the stability of the budget," Finance Minister Seth Terkper told Reuters.

Oil revenue is vital as Ghana battles to meet conditions set by a three-year aid program with the International Monetary Fund that aims to bring down inflation and the budget deficit as well as stabilize the cedi currency.

The revenue and TEN's role as a symbol of high-tech national development could also boost government fortunes ahead of what is expected to be a tight presidential election in December in which Mahama faces opposition leader Nana Akufo-Addo.

A senior opposition figure on Thursday told Reuters the oil field's opening would not help the government's chances, given that it has overseen a slump since winning the 2012 election.

Ghana was considered one of Africa's hottest investment destinations due to its exports of gold, oil and cocoa. Since 2013, however, a fall in commodity prices and a resultant fiscal crisis has slowed growth dramatically.

Jubilee produces 100,000 barrels of oil daily and 140 million standard cubic feet of natural gas after a 45-50 day shutdown in May.

Mahama said development of TEN was hindered by a maritime boundary dispute with Ivory Coast but the country was committed to a peaceful settlement and it should be resolved next year.