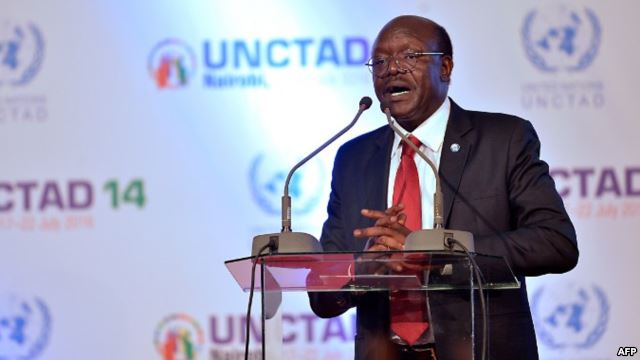 The 14th U.N. Conference on Trade and Development ended Friday in Nairobi with delegates adopting a measure giving the organization a central role in meeting U.N. sustainable development goals.

UNCTAD Secretary General Mukhisa Kituyi delivers a speech during the opening session of the organization's conference in Nairobi, July 17, 2016. (Photo/AFP)

The 14th U.N. Conference on Trade and Development ended Friday in Nairobi with delegates adopting a measure giving the organization a central role in meeting U.N. sustainable development goals.

UNCTAD said the quadrennial gathering also produced the beginning of an e-trade initiative, the launch of a multiple-donor trust fund on trade and productive capacity, and an agreement involving more than 90 nations on a road map for fisheries subsidies.

A report released earlier in the week by UNCTAD, "Economic Development in Africa 2016," noted that African governments should take action to prevent rapid debt growth from becoming a crisis.

The report also said the annual average foreign debt stock of Africa from 2011 to 2013 amounted to $443 billion, a significant increase from previous years. The study said African countries are losing as much as 70 percent of their exports to trade invoicing problems that in turn lead to illicit trade in commodities.

Economic analyst Aly-Khan Satchu of Rich Management in Nairobi spoke to VOA about the implications of debt management and alternative revenue sources for governments in Africa.

"We need to bring more scrutiny and oversight so we know exactly what’s going on and we are able to address the loopholes," said Satchu. "Policy is half of it; the next thing is execution. ... More than anything, what I think the problem is, is that Africa is not creating value addition. So many commodities are provided by us to the global market in enormous size, but we are not refining it."

Satchu said private-public partnerships and investments by Africans living abroad could be an alternate revenue stream for the continent.

Kenyatta said that "the vibrant and passionate discussions that went late into the night have delivered a plan of action for us for the next four years, and this plan is key to giving traction to our commitments made last year" regarding sustainable development, environmental objectives and trade issues.