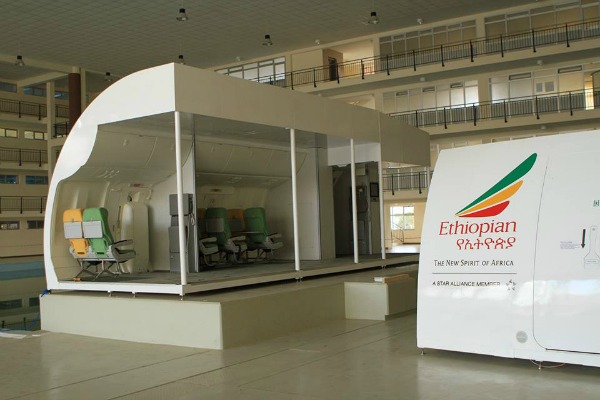 A fire rages in an airplane's overhead compartment while alarmed passengers cough from the smoke filtering through the cabin. What happens next could be a matter of life and death. Fortunately, this is just a drill. But for the hopeful flight attendants of Ethiopian Airlines it's a vital exercise in how to remain cool under extreme pressure.

A training plane at the Ethiopian Aviation Academy. (Photo: CNN)

A fire rages in an airplane's overhead compartment while alarmed passengers cough from the smoke filtering through the cabin. What happens next could be a matter of life and death. Fortunately, this is just a drill. But for the hopeful flight attendants of Ethiopian Airlines it's a vital exercise in how to remain cool under extreme pressure.

"We must be strong in our mind to manage the emergency situations," says Gloria Lawson, trainee flight attendant at the Ethiopian Aviation Academy. "Now we are doing theoretical lessons. (But) after one month, we will begin (with the) practical."

Lawson, originally from Togo in West Africa, has come to the largest aviation training school on the continent to learn her trade before taking to the skies.

Focused on pilots, ground staff, maintenance technicians, cabin crew, and leadership roles, it currently trains 1,300 students, who come from all over Africa.

But gaining access to this renowned institution is no cakewalk.

"When I was called I was so glad," says, Estelle Ngondonbol, a flight attendant trainee from Cameroon. "I thought 'oh my god it's my dream being realized.' I was so happy."
To be accepted "you've got to speak French, English, have a degree from a university and be presentable and pretty girl," Ngondonbol adds.

School of flight
The cost for flight attendant training is $5,000 for a three-month course. By contrast, the full pilot training program goes for $68,000.

In addition to learning basic service skills, flight attendants are also expected to handle a variety of scenarios, including an emergency water landing.

For Ethiopian Airlines CEO, Tewolde Gebremariam, this thorough approach is the only approach. $80 million has been invested in expanding the training facility recently.

"The Ethiopian Aviation Academy is going to play a leading role in making sure that Africans are well educated and prepared for 21st Century African aviation," Gebremariam says.

"We have 23 airplanes just for pilot training. It meets all global standards. I would say it's one of the most admired centers of excellence in the world," he adds.
And it's set to grow. By 2025, the academy hopes to train 4,000 students a year.

According to Gebremariam, who oversees Africa's largest commercial airline fleet in his role, giving people from the continent the skills to succeed is an essential part of the company's plans.

"The academy has duel objectives, the first is to make sure Ethiopian Airlines is not challenged by the shortage of skilled manpower in its vision 2025."

"The second one is to train ... African youth in their skills and enable them to acquire the tools so they can get high quality jobs. This could be at Ethiopian or (over) the entire continent of Africa."

Another area where Ethiopian Airlines has made strong progress in recent years is in pushing women to the forefront of all its services.

Earlier this year, 14 pilots, three of them female, graduated from the Ethiopian Aviation Academy.

In November 2015, meanwhile, Ethiopian Airlines made headlines by sending an all-women flight crew from Addis Ababa to Bangkok. The women covered every role, from flight attendants, to dispatchers, to pilots.

But Gebremariam recognizes that pushing the talents of women and the local population is only part of the process
It takes a lot to get a home-grown aviation company off the ground, after all.

"80% of the intercontinental traffic is carried by non-African carriers. This is a major challenge for all of us.

"(But) going forward, if we really work on educating our people, our youth, we're going to own the fate of aviation in our hands, indigenous African aviation."