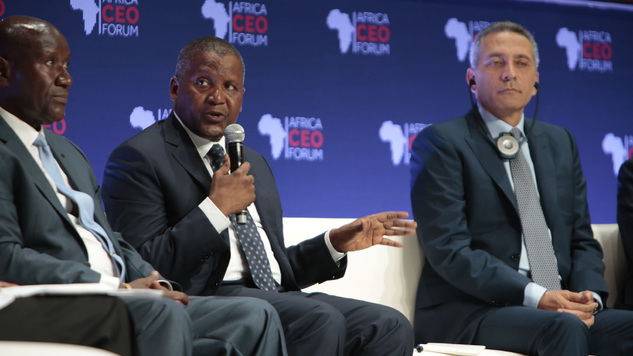 One of the largest meetings of African chief executives, bankers and investors is currently underway here in this West African capital, and is intended to be a marketplace for business opportunities on the African continent.

One of the largest meetings of African chief executives, bankers and investors is currently underway here in this West African capital, and is intended to be a marketplace for business opportunities on the African continent.

The Africa CEO Forum is taking place just a week after a terror attack in Grand Bassam, a beach resort town 50 kilometres from Abidjan. Despite initial concerns, the organisers decided to go ahead with the meeting – last year, the forum was to be held in the city but was cancelled over fears of Ebola.

This time, security around the city has been enhanced – including a visible police presence around the meeting venue and hotels.

This is the fourth edition of the conference; but the first time it is being held in Africa. More than 800 key players from the African private sector and around the world, of whom 500 are chief executives, are attending.

In a way, then, holding the meeting in Abidjan is a reflection of a new kind of corporate leader in Africa – more confident, more ambitious, and more resilient, even in the face of all the setbacks that scare off international investors, including security threats, Ebola, and the global commodity downturn.

“We have chosen a country and a region that is showing clear signs of robust economic development,” said Amir Ben Yahmed, founder and President of the Africa CEO Forum.

“In the current context, not only will we continue our mission, but together with the participants, we also intend to demonstrate that the people of Africa will not renounce their role in the development of the continent whatever the circumstances may be.”

As well as plenary sessions, round-tables and other workshops, the 2016 Forum will also have ‘Deal Rooms’, offering business people and investors the opportunity to identify new partners and to share the experiences and best practice of their respective sectors.
Bullish sentiment

While the global economy is projected by the International Monetary Fund and Organisation for Economic Cooperation and Development (OECD) to grow at 3% this year, Africa is expected to grow at 4.4%, and strengthen further to 5% in 2017.

Dangote is aggressively expanding his business empire in Nigeria, to set up a $14 billion oil refinery in Nigeria, projected to refine 650,000 barrels of crude oil per day.

The company is also expanding sugar and rice production in Nigeria, and outside Nigeria, Dangote Cement has a presence in 17 countries around the continent, with a production capacity of 43 million tonnes of cement a year.
More than commodities

“We’re looking to expand our Africa cement production to 80 million tonnes by 2019. So we’re very bullish [about Africa’s prospects].”

Despite Africa’s recent growth being chalked up to a commodity boom, there’s more at work – the continent’s accelerated growth over the past 14 years owes a great deal to improved macroeconomic and political stability and to structural economic reforms.

According to African Development Bank president Akinwumi Adesina, current and future growth will only be possible if this macroeconomic momentum is sustained, the global commodity environment notwithstanding. 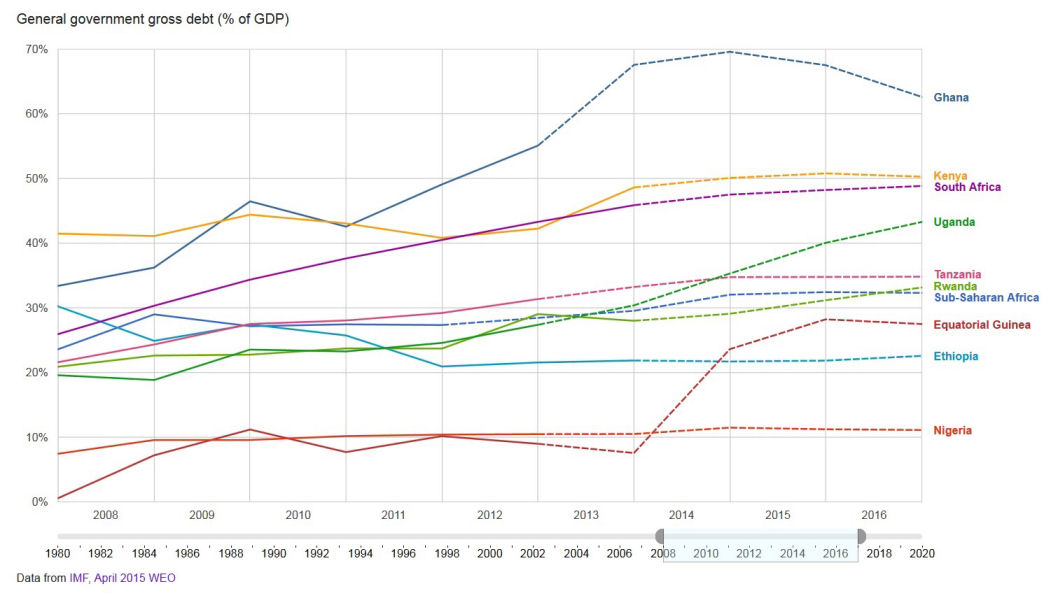 “[Recent] growth rates were possible because the macroeconomic environment is right. We have to maintain the momentum and not get into another debt cycle,” said Adesina at the CEO Forum.

Now, the challenge is meeting the rising cost of financing in repaying the foreign denominated debt.

Ghana’s public debt to Gross Domestic Product ratio, for example, has risen astronomically from 36.1% in 2009, to 72.8% in 2015, according to data from the International Monetary Fund.

According to Ghana deputy finance minister Mona Quartey, the government has “put a moratorium” on public borrowing, as the country tries to reign in debt levels.

Public debt-to-GDP is a measure of the ability of a country to pay back its loans, whose warning level is different for different countries – for developing countries, this is around 50% of GDP. Debt is considered sustainable when a country can meet its current and future debt service obligations in full, without recourse to debt relief, rescheduling or accumulation of arrears.
Balancing debt

Even so, this is not necessarily a negative thing - this debt level is comparable to other developing countries and is well below that of advanced economies. For example, the total debt for OECD countries was nearly 80% of GDP in 2008 and was expected to grow to 111.2% in 2015. The champion of debt is Japan with debt to GDP ratio of 230%.

The risk for African countries comes in when debt is rising faster than the economy is growing, and also when exchange rates and currency markets are volatile. With currencies depreciating against the dollar, African governments have to dig into more of their local currencies to pay off their dollar loans.

African governments are expected to experience up to $10.8 billion in losses or the equivalent to 1.1% of the region’s GDP on sovereign bonds that they issued in 2013 and 2014, due largely to exchange rate risks.