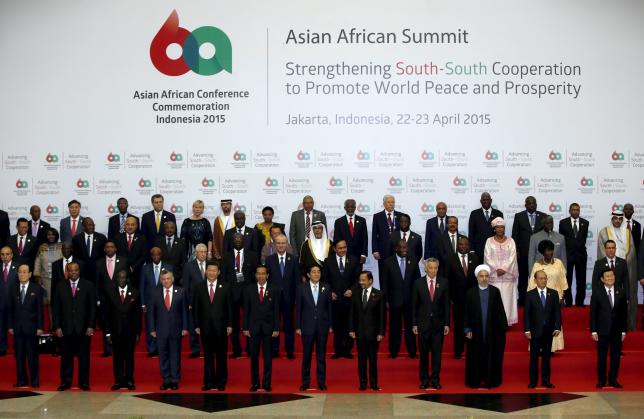 Leaders of Asian and African nations called on Wednesday for a new global order that is open to emerging economic powers and leaves the "obsolete ideas" of Bretton Woods institutions in the past.

Leaders from Asia and Africa at the Asian-African Conference in Jakarta April 22, 2015. (Photo/Reuters/Darren Whiteside)

Leaders of Asian and African nations called on Wednesday for a new global order that is open to emerging economic powers and leaves the "obsolete ideas" of Bretton Woods institutions in the past.

Their calls came at the opening of a meeting of Asian and African nations in Jakarta to mark the 60th anniversary of a conference that made a developing-world stand against colonialism and led to the Cold War era's non-aligned movement.

Among the leaders listening were Japanese Prime Minister Shinzo Abe and Chinese President Xi Jinping, who were expected to meet on the sidelines of the conference, the latest sign of a thaw in relations between the Asian rivals.

Sino-Japanese ties have chilled in recent years due to feuds over the two neighbors' wartime past, as well as territorial rows and regional rivalry. Bilateral talks in Jakarta on Wednesday could promote a cautious rapprochement that began when Abe and Xi met at a summit in Beijing late last year.

Abe, in an apparent reference to China's growing military assertiveness, told the conference that the use of force by the "mightier" should never go unchecked.

The Japanese prime minister also said Japan had pledged, "with feelings of deep remorse over the past war", to adhere to principles such as refraining from acts of aggression and settling international disputed by peaceful means.

It was not immediately clear if the remarks would satisfy China's desire for Japan to acknowledge its wartime past, but a Japanese official told Reuters Abe and Xi would meet.

Xi had earlier told the conference that "a new type of international relations" was needed to encourage cooperation between Asian and African nations, and said the developed world had an obligation to support the rest with no political strings attached, the Xinhua news agency said.

Indonesian President Joko Widodo, the conference host, said those who still insisted that global economic problems could only be solved through the World Bank, International Monetary Fund and Asian Development Bank were clinging to "obsolete ideas".

"There needs to be change," he said. "It's imperative that we build a new international economic order that is open to new emerging economic powers."

The IMF and World Bank were at the center of the post-World War Two monetary order created by the United States and Europe at the Bretton Woods Conference in New Hampshire in 1944.

Widodo made no mention of the China-backed Asian Infrastructure Investment Bank (AIIB) that is seen as a competitor to the Western-dominated World Bank and Asian Development Bank, but Indonesia is one of nearly 60 countries that have offered to be founding members of the AIIB.

The United States and Japan have not thrown their support behind the bank, which is viewed as a threat to U.S. efforts to extend its influence in the Asia-Pacific region and balance China's growing financial clout.

Zimbabwean President Robert Mugabe told the conference that Asian and African countries "should no longer be consigned to the role of exporters of primary goods and importers of finished goods".

He called it a "role that has historically been assigned to us by the colonial powers and starting from the days of colonialism".

Indonesia invited heads of state and government from 109 Asian and African countries, but according to a conference official, 21 leaders turned up, which commentators have said shows the group is no longer relevant.

The world order has changed dramatically since nearly 30 heads of state gathered in 1955 in the Indonesian town of Bandung to discuss security and economic development away from global powers embroiled in the Cold War.

Together they accounted for less than a quarter of global economic output at that time, but today they contribute to more than half of the world economy. Many of the Bandung countries, such as China and India, are now themselves at top tables like the Group of 20 and wield significant economic power.

Widodo said the group may be meeting in a changed world but still needed to stand together against the domination of "a certain group of countries" to avoid unfairness and global imbalances.