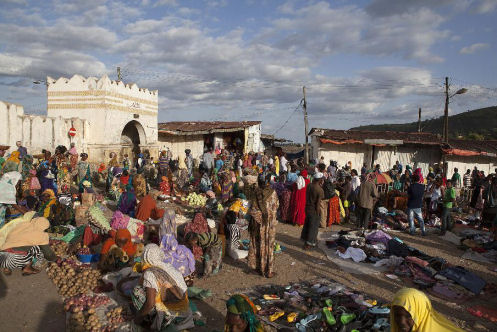 Hyenas howl and feast on flesh every night outside the ancient walls of Harar -- one of Islam's holiest cities that is holding out against the pressures of the modern world.

But change is coming, and campaigners are working hard to preserve the gated Ethiopian city's unique history, cultural and religious traditions.

People gather at a market set up in front of the Shoa Gate, one of the five historic gates of the ancient walled city of Harar, Ethiopia, on August 3, 2014 (AFP/Zacharias Abubeker)

Hyenas howl and feast on flesh every night outside the ancient walls of Harar -- one of Islam's holiest cities that is holding out against the pressures of the modern world.

But change is coming, and campaigners are working hard to preserve the gated Ethiopian city's unique history, cultural and religious traditions.

But despite the encroachments from the outside world, a generation of cultural campaigners are determined to preserve ancient customs -- from clothing to bookbinding, to dance and song.

"Because of globalisation, you can't prevent all changes, but the culture, the religion, still survives," said Abdela Sherif, owner of a museum housing the largest collection of Harari cultural relics in the world.

"We are going to keep our culture, our customs, our old civilisation, we are going to keep it by revitalisation," Sherif adds, speaking inside his museum in Harar packed with old coins, yellowed Korans, vintage silk dresses and rusting daggers.

He runs bookbinding workshops, and makes digital copies of old books and songs as part of his preservation campaign.

Founded in the 10th century, Harar -- also called Jugol -- is reputed to be one of the oldest cities in east Africa, with three mosques more than a thousand years old, some of the oldest outside the Arabian Peninsula.

The UNESCO-listed town, lying some 525 kilometres (326 miles) east of the capital Addis Ababa, is said by some to be the fourth holiest city in the Islamic world -- after Mecca, Medina and Jerusalem -- and locals boast it has the highest concentration of mosques and shrines in the world.

Legendary British explorer Sir Richard Burton was famously one of the first foreigners to penetrate the "forbidden" walls in 1854, disguised as a Muslim trader, his face smeared with dye.

Three decades later, French poet Arthur Rimbaud made the fortified town his home, trading in coffee and, reportedly, in ivory and guns.

The four-metre (13-foot) high wall was built in 1551 by one of Harar's 72 kings, with its five gates remaining today.

The walls repelled enemies and foreigners, remaining mostly closed to non-Muslims until 1887 when it was conquered by Ethiopia's Emperor Menelik, ushering in a new era that opened the city for Christians and Ethiopians of diverse ethnicities.

- Modern ways to preserve the old -

Modern-day Harar is a pastiche of old and new, and despite the presence of mobile telephones, computers and satellite dishes, a deeply embedded religious piety closely linked to cultural customs remains.

"They want to remain themselves always, not to imitate others. So when it comes to the influence of the West still they say: 'This is theirs, and ours is ours'," Abdusemed said, speaking from his office near a busy market selling prayer mats, sunglasses and football tops.

"We take some, but we don’t take all, the influence is not that big, but we use the gadgets in the way we want to use it," he added.

As a result, some traditions remain strong, especially the festival marking the end of the Muslim holy fasting month of Ramadan, which draws thousands of people for three days of song, music and feasting, as their ancestors have done for centuries.

But unlike previous generations, most people are not dressed in traditional silk gowns, with drummers wearing hooded sweatshirts, and revellers using smart phones to film the party.

But Mariam Sherif, who travelled from the US for the festival, insists the customs at root remain firm.

"That's the only difference between now and then - everything we do, all the festivities, remain the same," she said, standing near a crush of people dancing inside a shrine.

Young Hararis like Sherif are actively embracing their heritage, even using social media to teach young people about the old way of life.

"We fear that we might lose it someday and we will cry," said Amir Redwan, sitting on a floor mat chewing the herbal stimulant khat, as the evening call from a mosque called out.

Redwan uses Facebook to reach out to Harari youth, to encourage them to learn about their heritage and history.

"It is upon them, upon us all, to keep this with whatever might that we have," he said.