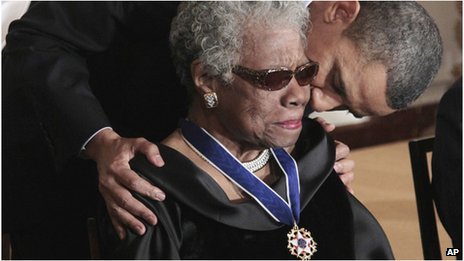 US President Barack Obama has led the tributes to Maya Angelou, describing the poet, author and activist as "one of the brightest lights of our time".

He hailed Angelou, who has died aged 86, as "a brilliant writer, a fierce friend and a truly phenomenal woman".

US President Barack Obama has led the tributes to Maya Angelou, describing the poet, author and activist as "one of the brightest lights of our time".

He hailed Angelou, who has died aged 86, as "a brilliant writer, a fierce friend and a truly phenomenal woman".

She made her name with the memoir I Know Why the Caged Bird Sings, which charted a childhood of oppression and abuse in the Deep South in the 1930s.

Her family described her as "a warrior for equality, tolerance and peace".

In a statement on Facebook, they said she passed away quietly at home in Winston-Salem, North Carolina, at 08:00 EST (12:00 GMT).

"Her family is extremely grateful that her ascension was not belaboured by a loss of acuity or comprehension," they said.

"She lived a life as a teacher, activist, artist and human being... The family is extremely appreciative of the time we had with her and we know that she is looking down upon us with love."

Mr Obama gave her the Presidential Medal of Freedom, the country's highest civilian award, in 2011.

He said: "Over the course of her remarkable life, Maya was many things - an author, poet, civil rights activist, playwright, actress, director, composer, singer and dancer.

"But above all, she was a storyteller - and her greatest stories were true.

"A childhood of suffering and abuse actually drove her to stop speaking - but the voice she found helped generations of Americans find their rainbow amidst the clouds, and inspired the rest of us to be our best selves."

Raised by her grandmother in Stamps, Arkansas, Angelou was raped by her mother's boyfriend at the age of seven. After she told her family what had happened, the boyfriend was killed.

"I thought my voice had killed him, so it was better not to speak - so I simply stopped speaking," she said. She remained mute for five years, but read voraciously.

Former President Bill Clinton, who invited Angelou to read at his 1993 inauguration, said America had lost a national treasure and he and wife Hillary had lost "a beloved friend".

"The poems and stories she wrote and read to us in her commanding voice were gifts of wisdom and wit, courage and grace," he said.

"I will always be grateful for her electrifying reading of On the Pulse of Morning at my first inaugural, and even more for all the years of friendship that followed."

Others paying tribute included civil rights campaigner Reverend Jesse Jackson, who wrote on Twitter: "The renaissance woman has made a peaceful transition. She acted, sang, danced & taught She used poetry as a road for peace."

Harry Potter author JK Rowling tweeted one of Angelou's quotes: "'If you are always trying to be normal, you will never know how amazing you can be.' Maya Angelou - who was utterly amazing."

A statement from Wake Forest University, where Angelou had been professor of American studies since 1982, said: "Dr Angelou was a national treasure whose life and teachings inspired millions around the world."

I Know Why the Caged Bird Sings, which dealt with the racism and family trauma of her upbringing, spent two years on the US best-seller list after its publication in 1970. It was the first of seven memoirs.

After the poverty, violence and segregation of her childhood, she became a singer, a dancer, cocktail waitress, prostitute and an actress before beginning her writing career.

Her career had many outlets, straddling television, theatre, film, children's books and music.

Angelou was also a prominent civil rights activist and a friend of Martin Luther King and Malcolm X.

Through her writing and interviews, her strength and eloquence as a role model for those seeking to overcome inequality and injustice won her many admirers.

In her final Facebook post on Monday, she said an "unexpected medical emergency" had forced her to cancel an engagement.