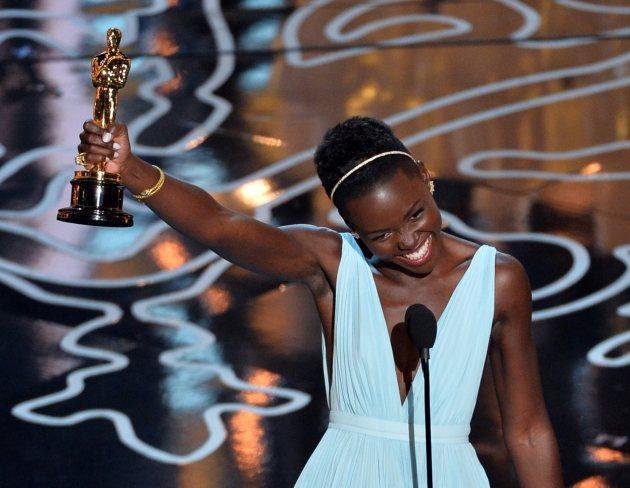 "You are the pride of Africa," Kenya's president exclaimed on Twitter as he celebrated Kenya's first major Oscar win by actress Lupita Nyong'o.

Nyong'o was the topic of the day on Kenya's radio and TV stations Monday, the day after her Oscar win for Best Supporting Actress in the movie "12 Years A Slave."

Lupita Nyong'o, winner of the award for best actress in a supporting role for '12 Years a Slave', at the Oscars on Sunday, March 2, 2014, at the Dolby Theatre in Los Angeles. (Photo Getty Images)

"You are the pride of Africa," Kenya's president exclaimed on Twitter as he celebrated Kenya's first major Oscar win by actress Lupita Nyong'o.

Nyong'o was the topic of the day on Kenya's radio and TV stations Monday, the day after her Oscar win for Best Supporting Actress in the movie "12 Years A Slave."

At a conference at the United Nations headquarters in Nairobi, more than 300 people broke out into applause after Wanjira Maathai — the daughter of the late Kenyan Nobel Prize winner Wangari Maathai — mentioned her mother and Nyong'o in the same sentence.

"We all had hoped of course that she would win. Everybody feels a sudden attachment to her, she's a Kenyan woman," Maathai said in an interview later. "A lot of her work, a lot of her experience in film started in Kenya."

Nyong'o, 31, was born in Mexico to Kenyan parents but was mostly raised in Kenya. A graduate of the Yale School of Drama, Nyong'o had starred in several productions in Kenya before landing her breakout role alongside Brad Pitt.

Nyong'o had been considered a front-runner in a category that included Jennifer Lawrence and Julia Roberts. When her name was called Sunday, she bent over in her seat as the audience erupted.


Just before her win, Kenyan President Uhuru Kenyatta issued a statement saying Nyong'o's accomplishments testify to her talent and the determination to go the extra mile that success demands.

At the end of her Oscar speech, Nyong'o asked that her win remind "every little child that no matter where you're from your dreams are valid."

Maathai spoke Monday, which is Wangari Maathai Day in Africa, to honor the Nobel prize winner's dedication to the environment. She said that like her mother, Nyong'o is another Kenyan who has reached great heights.

While celebrating the win, Kenyan film critic Ogova Ondego criticized Kenya for not supporting the arts. Nyong'o, whose father is a Kenyan senator, did not get any support from the government while developing her talent, Ondego said.

Kenyatta in Sunday's statement said the government has made the promotion of arts a key pledge that must be delivered. He said many young Kenyans will have access to funding for artistic projects.

"It is our intention that Lupita becomes the first of an endless line of Oscar nominees and winners from Africa and Kenya," he said.

David Opondoe, the managing director of Phoenix Players, a Kenya-based theater company where Nyong'o performed earlier in her career, said Nyongo's success will encourage many in in Kenya to embrace the arts.

"It shows that there is so much talent, only that the opportunities are not there," he said. "It's time for parents and government to see that this is not a pastime. It's something you can do professionally and bring glory."

More than 1,000 people have auditioned at the Phoenix Players this year, he said, whereas before they had to actively hunt actors for parts. Opondoe said he first saw Nyongo on stage in the play "There Goes The Bride" in 2002, which he also starred in.

"At that time she was viewed as an amateur and she gave us, some of the professionals, a run for our money. She had her lines and was on point and I knew this person is passionate about acting," he said.

"We are going to celebrate this for a very long time," Opondoe said.