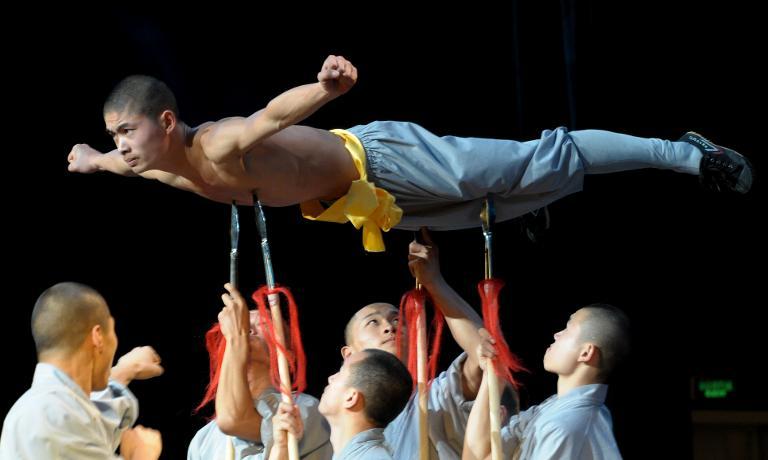 Ten grey-suited Buddhists crouch like leopards stalking a muntjac before barrelling across the stage in an explosion of gravity-defying pivots, kicks and somersaults that would make an osteopath wince.

These are the warrior monks of China's fabled Shaolin Temple, the birthplace of kung fu which is spreading its gospel to Africa as part of a wood-smashing, sword-dancing, spear-balancing grab at global ubiquity.

Ten grey-suited Buddhists crouch like leopards stalking a muntjac before barrelling across the stage in an explosion of gravity-defying pivots, kicks and somersaults that would make an osteopath wince.

These are the warrior monks of China's fabled Shaolin Temple, the birthplace of kung fu which is spreading its gospel to Africa as part of a wood-smashing, sword-dancing, spear-balancing grab at global ubiquity.

"Shaolin kung fu isn't simply a physical exercise," said 26-year-old Shi Yancen as he limbered up at the Chinese-built Grand Theatre in the Senegalese capital Dakar ahead of the monks' first ever show in west Africa.

"Through learning kung fu you can also learn and admire the culture of Buddhism."

Shi, who has an incongruously gentle face and looks barely out of his teens, has been mastering kung fu for half his life in the austere surrounds of the Shaolin Temple, nestled in the forested mountains of Henan, one of China's most impoverished provinces.

A common sight for years across Asia, the United States and Europe, the Shaolin monks are turning their attention to Africa, where kung fu has been largely overshadowed by tribal martial arts but is quickly growing in popularity.

The attention is paying off, with thousands of youngsters taking up kung fu each year, and 12 nations, including Senegal, participated in the fifth pan-continental kung fu championships in Madagascar in September.

The temple has no schools yet in Africa but its foreign liaison officer, Wang Yumin, told AFP its strategy was bring pupils to China and get them to spread the message of "love, justice and health" back home.

"The Shaolin Temple has the mission to spread our tradition and Africans have the same demand to share our legendary culture," she said.

Students from six African countries started five years of training at the temple in 2011 and the monks have also begun shorter courses, all funded by China.

In December apprentices from Tanzania, Ethiopia, Mauritius, Uganda and Nigeria graduated from the first three-month Shaolin Kung Fu African Class of the Ministry of Culture.

"Life in the Shaolin Temple is unimaginably lovely and peaceful. It's not like the real world where there is so much hustle," one of the graduates, Nigerian Peace Emezue, was quoted as saying in the state-run China Daily newspaper.

"I have found a lot of peace of mind here and to be at peace with myself. I would like to teach more people how to do that."

- Outlawed during the Cultural Revolution -

Legend places the origins of the Shaolin tradition at 495 AD, when the emperor Xiaowen is said to have ordered the construction of a temple, deep in a mountain forest, in honour of a wandering Indian monk named Batuo.

Around 30 years later another Indian ascetic named Bodhidharma arrived and spent nine years meditating in a nearby cave before teaching the monks Zen Buddhism -- known as Chan in China -- and the beginnings of what would become Shaolin kung fu.

By its 13th century heyday, the temple was home to around 3,000 monks, but it fell on hard times after a warlord set fire to it during China's civil war in the 1920s and it was damaged further under Japanese occupation 20 years later.

With kung fu outlawed during the 1966-76 Cultural Revolution, much of the temple was burnt down by Chairman Mao's Red Guards and deserted by the monks.

The monastery's renaissance is largely the work of "Shaolin Temple", a 1982 martial arts mega-hit film starring kung fu champion Jet Li which established the monks as a global brand just as China was embarking on its economic liberalisation.

Farmer's son and factory worker Shi Yonxin firmly ingrained the brand in the public imagination when he took over as abbott in 1999 and began sending his monks off around the world.

Today the temple houses around 500 monks teaching and learning Buddhist theology, running schools and orphanages, practising kung fu and greeting the tourists who make the trip to its tranquil grounds each year in their millions.

For some, however, the magic of Shaolin is wearing thin.

Traditionalists have complained that the temple's financial adroitness is overshadowing the prowess of the students, who are swapping meditation for lessons in business studies and copyright law.

The temple, which already has nearly 130 martial arts clubs in the United States alone, was criticised in 2011 over the commercialisation of Buddhism when it announced a vast business plan for global expansion.

"We currently operate over 40 companies in cities across the world, such as Berlin and London," the Chinese Global Times quoted the financially-astute Shi, the first Chinese monk to earn a master's degree in business administration, as saying at a Beijing culture forum in 2011.

Hanqiu Huang, the deputy chief of Henan's culture department, told AFP ahead of the monks' west African debut in mid-January that Shaolin's expansion was fulfilling an overseas infatuation with its particular brand of spirituality.

"The leader of the Shaolin temple is doing all he can to spread the teachings of Buddhism. He's not doing that for commercial reasons," she said.

Whether Shaolin will catch on in Africa as it has elsewhere remains to be seen but the portents looked good on the monks' opening night in Dakar.

"I wasn't expecting much but it was outstanding," said Marika Kotze, a 48-year-old IT consultant who has been living in the city for 15 years.

"Wrestling is the big thing in Senegal but I can see this catching on."