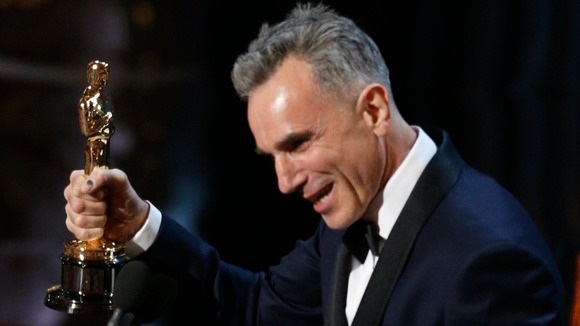 Daniel Day-Lewis has made Oscars history by becoming the first man to win the best actor prize three times.

The British-born star, who had been the runaway favourite, was rewarded for his role in Steven Spielberg's Lincoln.

Daniel Day-Lewis has made Oscars history by becoming the first man to win the best actor prize three times.

The British-born star, who had been the runaway favourite, was rewarded for his role in Steven Spielberg's Lincoln.

"I really don't know how any of this happened. I do know I've received much more than my fair share of good fortune in my life," he said.

In a live broadcast from the White House, First Lady Michelle Obama joined Jack Nicholson to help present the best picture prize at the end of the night.

Argo, directed by and starring Affleck, is the first best picture winner not to have also been nominated for best director since 1989's Driving Miss Daisy.

Oscars host Seth MacFarlane joked at the start of the ceremony: "Argo's story is so top-secret that its director remains unknown to the Academy."

Accepting his award alongside fellow producers George Clooney and Grant Heslov, Affleck paid tribute to the "genius" Steven Spielberg, who lost out in the same category.

Referring to his previous Oscar success with 1997's Good Will Hunting, he said: "I never thought I would be back here and I am because of so many of you who are here tonight.

"It doesn't matter how you get knocked down in life, all that matters is that you get up."

Daniel Day-Lewis, who holds UK-Irish citizenship, previously won best actor for My Left Foot (in 1990) and There Will Be Blood (2008) and has a reputation for immersing himself in his roles.

This year's victory puts Day-Lewis ahead of Hollywood legends Jack Nicholson, Marlon Brando, Dustin Hoffman and Tom Hanks - who all have two best actor wins to their names.

The 22-year-old, who stumbled over her dress on her way to the stage, joked: "You guys are just standing up because you feel bad that I fell over and that's embarrassing."

Surveying the audience in Hollywood's Dolby Theatre, she added: "This is nuts." It was the first Oscar win for Lawrence, who was previously nominated for best actress in 2011 for her performance in Winter's Bone.

With her cropped hair and gaunt face, Hathaway's teary version of I Dreamed a Dream had made her an Oscar favourite. "It came true," the actress said when she collected her statuette.

Hathaway's Oscar was her first after previously nominated in 2008 for Rachel Getting Married.

She said: "Here's hoping that someday in the not too distant future, the misfortunes of Fantine will only be found in stories and not in real life."

British singer Adele won the Oscar for best original song for her Bond theme Skyfall, which she also performed during the show.

She struggled through tears to thank the Bond producers and her co-writer Paul Epworth, who collected the award alongside her.

Ang Lee won his second Oscar for directing Life of Pi, the adaptation of Yann Martel's fantasy novel about a boy stranded in a lifeboat with a Bengal tiger. The film won four Oscars in total, more than any other film.

The Taiwanese-born director, who won previously for Brokeback Mountain in 2006, exclaimed: "Thank you, movie god!"

Christoph Waltz won his second Oscar for best supporting actor in a Quentin Tarantino film, this time for playing a German bounty hunter in the slave revenge story Django Unchained.

Picking up the award, Waltz offered thanks to his character Dr King Schultz and to "his creator and the creator of his awe-inspiring world, Quentin Tarantino".

The Austrian actor won his first Oscar as a Nazi colonel in Tarantino's Inglourious Basterds in 2010.

It was the first time since 2006 that the Oscars for best picture, director and four acting categories all went to different films.

Tarantino won the original screenplay prize for Django Unchained, adding to the Oscar he won for writing Pulp Fiction in 1994. "I have to cast the right people to make those characters come alive and boy this time did I do it," he said.

The award for costume design went to Briton Jacqueline Durran for Anna Karenina, who described the win as "completely overwhelming" and paid tribute to her children, who were "fast asleep in England".

Unusually, there was a tie in the sound editing category - the Oscar was shared by Zero Dark Thirty and Skyfall.

Searching for Sugar Man, which tells the story of musician Rodriguez who disappeared from public view in the early 1970s but developed a cult following in South Africa, won the Oscar for best documentary.

Producer Simon Chinn said: "Rodriguez isn't here tonight because he didn't want to take any of the credit himself."

Austrian drama Amour won the Oscar for best foreign language film. The French-language film, directed by Michael Haneke, portrays the indignities of an elderly Parisian couple - Anne and Georges - as they cope with Anne's wish to die after a stroke.

The ceremony was hosted for the first time by Seth MacFarlane, who created the animated comedy Family Guy and directed the movie Ted.

"I honestly cannot believe I'm here," he quipped at the start of the show. "It's an honour that everyone else said 'no'."

The show also included a tribute to the James Bond franchise, followed by an appearance by Dame Shirley Bassey, who sang her theme song to the 1960s Bond classic Goldfinger.

During the section of the show that pays tribute to those who died in 2012, Barbra Streisand sang the late Marvin Hamlisch's The Way We Were, from the 1973 romantic drama in which she starred with Robert Redford. It was Streisand's first Oscars performance for 36 years.