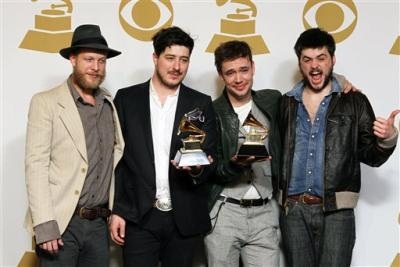 The 55th Grammy Awards have taken place in Los Angeles, with Fun, Gotye and Mumford and Sons among the winners.

Fun's anthem We Are Young, featuring Janelle Monae, was named song of the year, with the New York band going on to win the best new artist prize.

The 55th Grammy Awards have taken place in Los Angeles, with Fun, Gotye and Mumford and Sons among the winners.

Fun's anthem We Are Young, featuring Janelle Monae, was named song of the year, with the New York band going on to win the best new artist prize.

Gotye's international hit Somebody That I Used To Know received the record of the year, one of three prizes received by the Belgian-Australian artist.

Surprised Mumford and Sons took home the album of the year prize for Babel.

The English folk rockers received their honour from fellow-countrywoman Adele, who had earlier won best pop solo performance for her live version of Set Fire to the Rain.

Adele, who won six awards last year, said: "I just wanted to be part of the night, because I loved it last year, obviously. Thank you, I just wanted to say a massive, send big love to all the other girls, and all us females doing this because we work so hard and we make it look so easy."

Mumford and Sons had received six nominations ahead of the ceremony. In the event, though, their only other prize came for best long form music video.

Ben Lovett from the band said: "I just want to say how beautiful Adele is looking tonight, and how great it is to be presented this award by another British musician.

"Yeah, there's a few of us out there, and the Grammys have opened their arms to us, and we're very grateful for all of this country and the Grammy foundation for being so welcoming."

Indie rock group The Black Keys enjoyed the most success overall, receiving four of the six awards for which they had been shortlisted.

The event, held at Los Angeles' Staples Center, kicked off with Taylor Swift singing her hit We Are Never Ever Getting Back Together.

The 23-year-old star was joined by performers on stilts, a White Rabbit and human puppets for the Alice in Wonderland-themed performance.

Sting, Bruno Mars and Rihanna joined forces for a Bob Marley tribute that featured Rihanna and Marley's son Ziggy duetting on his father's 1980 classic Could You Be Loved.

Sir Elton returned later to perform in another all-star collaboration, paying tribute as he did so to the 26 people killed in the Sandy Hook Elementary School shootings last December.

The event was preceded by a pre-awards ceremony at a neighbouring venue at which the majority of this year's prizes were handed out.

Winners announced ahead of the main event included the late Indian sitar player Ravi Shankar, whose award for best world music album was collected by his daughter Anoushka.

"I wish he was here to do it himself," said Shankar. The 31-year-old had been nominated in the same category alongside her father, who died in December.

Yet it was The Black Keys and its singer-guitarist Dan Auerbach who dominated the pre-telecast awards show, receiving prizes for best rock song and best rock album.

Auerbach received an additional prize for non-classical producer of the year, with his band going on to win best rock performance during the main awards ceremony.

"Welcome to the greatest music show on earth," said rapper LL Cool J at the beginning of the evening in his role as ceremony host.

The event saw a surprise appearance from Prince, who appeared sporting black sunglasses and a white cane to present the record of the year award to Gotye.

The Belgian-Australian musician said he was overwhelmed to meet one of his musical heroes.

"A little bit lost for words, to receive an award from the man standing behind us with the cane. Many years listening to this man's music growing up, and a big reason I was inspired to make music. Thank you."