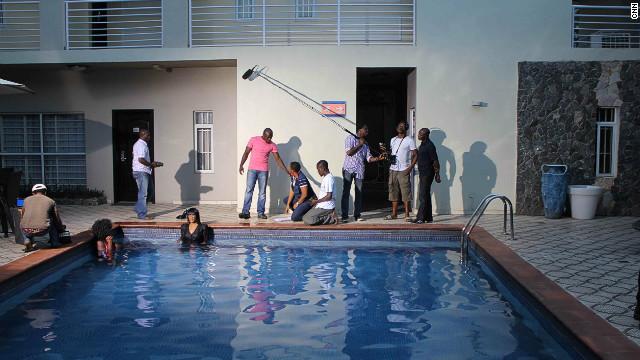 The mega industry, one of Nigeria's biggest employers, has been notorious for churning out more than 1,000 typically low-budget films a year, fusing a wide array of stories ranging from romance and drama to comedy and witchcraft.

The mega industry, one of Nigeria's biggest employers, has been notorious for churning out more than 1,000 typically low-budget films a year, fusing a wide array of stories ranging from romance and drama to comedy and witchcraft.

It is currently the third-largest producer of feature films in world, ranking behind only Hollywood in the U.S. and India's Bollywood revenue.

And lately, instead of relying on shoe-string budgets, many Nollywood movies are attracting funding of a few million dollars, benefiting from the films' growing popularity.

But while the industry gets bigger, insiders say Nollywood has remained true to its recipe for success -- its connection with the audience.

Nigerian director Lancelot Imasuen, who is currently working on a $2 million film called "Invasion 1987," says Nollywood movies are made for Nigerians and the rest of the continent.

Imasuen, a pioneering filmmaker with more than 10 years of experience, says that Nollywood's themes strike a familiar chord with the audience making them feel part of the stories.

And that, he says, is the industry's big advantage compared to the competition posed by Hollywood productions.

"For us in Africa, we just get entertained by American films," says Imasuen. "When I'm watching Spiderman or Batman and all that, its just for spectacle. I'm just having fun because I know its not realistic for the guy just to fly here and there -- there is nothing that relates to us as individuals."

Known in Nollywood's circles as "The Governor," Imasuen is one of the most sought after names in Nigerian filmmaking -- he once directed 29 movies in just one year, 27 of which were big hits.
People are getting more and more interested because they can feel the pains, they can feel the excitement, it's so real to them.
Lancelot Imasuen, director

"That's my job, that's the never say die spirit of the Nigerian man," he explains.

"If you can't get it this way, you have to do it this way and so I tried to do right. And for me that was a great challenge and when you're good at what you're doing, there is a tendency that people call you to do more," adds Imasuen.

Read more: Exhibition shows off the art of Nollywood

In fact, it is the hard work and dedication of people like Imasuen that have helped Nollywood to grow and become a thriving industry in the last two decades

"If you spend any time in Nigeria, it is difficult to come across a person who hasn't heard of Nollywood," says Jason Njoku, founder of iROKO Partners, an internet company that distributes Nollywood films to online viewers across the world.

"But at the same time, the pan-African nature of it -- from the Kenyans to the Ghanaians to Gambians to people in the DRC -- there's a massive base of people who really love this content."

One up-and-coming actress is Uru Eke, a newer face in Nollywood who has followed an unconventional path to stardom.

Born in the UK, Eke went to university and began a career in information technology that lasted for five years before deciding to pursue her lifelong dream of becoming an actress in Nigeria.

Eke, who is among the stars of Nollywood's latest hit movie "Last flight to Abuja," says her goal is to become one of the top names in the industry.

"I'm working hard and I'm very hopeful, it's just the positive attitude and the strength that I have to get there," she says. "Nigeria is by no means the easiest place to start a business or a career, but I think it's the tenacity, the spirit to succeed despite the odds, that can always drive you to reach your goal, actualize your dream. So with that spirit that I have, I know the sky's my limit."

"The intellect, the inspiration, the creativity, they all abound, but the truth of the matter is the challenges almost exceeds the goodness," he says.

But despite all the difficulties, Imasuen says that he and his peers will continue doing what they love in order to help Nollywood grow even further.