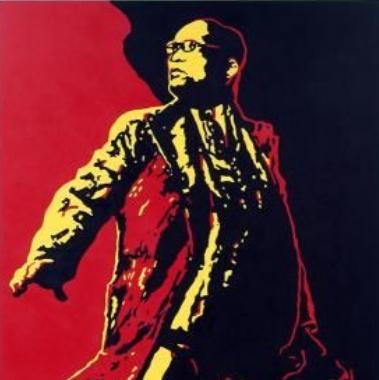 Two men on Tuesday vandalised a portrait of President Jacob Zuma posing as Vladimir Lenin with his genitals exposed in a Johannesburg gallery, prompting the curator to take down the painting.

The vandalism succeeded where a street protest, a court battle and a pornography probe had so far failed in making the Goodman Gallery remove the painting from an art exhibition about corruption.

A painting entitled The Spear, showing South African president Jacob Zuma posing as Lenin with his genitals exposed, is shown in a Johannesburg gallery on May 18. The painting was vandalised by two men on Tuesday as a court battle over whether it could be shown in public got under way. (Photo AFP)

Two men on Tuesday vandalised a portrait of President Jacob Zuma posing as Vladimir Lenin with his genitals exposed in a Johannesburg gallery, prompting the curator to take down the painting.

The vandalism succeeded where a street protest, a court battle and a pornography probe had so far failed in making the Goodman Gallery remove the painting from an art exhibition about corruption.

A red X was painted over Zuma's face and genitalia before black paint was smeared across the image. The scene was captured by the local eNews television station and broadcast endlessly through the day.

Two men were arrested for defacing the portrait, and a third man was arrested for spray-painting the gallery's wall, police spokesman Vish Naidoo told AFP. The third man had tried to paint the word "Respect" outside the gallery, according to Sapa news agency.

The vandalism occurred as about 400 supporters of the ruling African National Congress (ANC) sang and danced in downtown Johannesburg in support of Zuma during a court hearing on the party's request to force the gallery to remove the painting.

The day before, the Film and Publications Board had visited the gallery after complaints that the image was pornographic.

Although the gallery had stepped up security, deploying private armed guards, witnesses said the two men managed to sneak into the gallery with small tins of paint.

Controversy over the artwork arose last week and has since spiralled into loud public debate in the media and on social networks.

Opponents brand its depiction of Zuma as racist and insulting of the president, while supporters justify the painting as freedom of expression protected by the country's constitution.

Sipho Sithole, an ANC supporter who was outside the gallery, supported the vandalism.

"It's sad I wasn't here (during the attack) because I would have bought more paint, we would have painted the whole building black," he told AFP.

ANC supporter Bongani Mkhwanazi was prepared to go even further.

"Seriously I want to go to that gallery and I want to burn it," he told AFP outside the High Court.

The ANC's case against the painting was postponed to Thursday, when a full bench of judges will decide if the artist's right to freedom of expression trumps Zuma's privacy.

Men and women dressed in the party's green, black and gold sang anti-apartheid anthems in Zulu and brandished placards in front of an ANC truck and large television screen.

ANC secretary general Gwede Mantashe told the crowds the party would gather again on Thursday while its alliance partner the Young Communist League marched on the gallery.

"The painting is bad. It's crude, it's rude, it's disrespectful," he said.

"They hate us as they did before 1994," he said, referring to the end of white-minority rule, while the crowd cheered.

"We must defend our right to be ourselves."

"Our culture is very much against that. You can never refer to someone's private parts," said Elizabeth Mabaso, 58.

The polygamous president generated national debate when he married for a sixth time last month. He has four current wives and 21 children, including several out of wedlock.