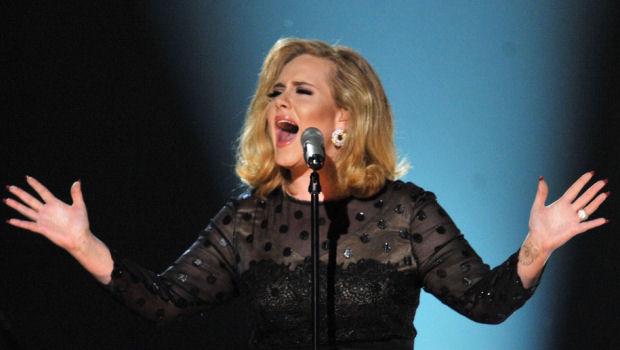 Adele emerged as the top winner at Sunday's Grammy Awards, winning six trophies including the prestigious trifecta of record, song and album of the year.

The British songstress, who also made a triumphant comeback from vocal cord surgery on the Grammy stage, sobbed as she won the night's final award, album of the year, for "21." It was last year's top-selling album with more than six million copies sold and remains lodged at the No. 1 spot on this year's charts.

Adele emerged as the top winner at Sunday's Grammy Awards, winning six trophies including the prestigious trifecta of record, song and album of the year.

The British songstress, who also made a triumphant comeback from vocal cord surgery on the Grammy stage, sobbed as she won the night's final award, album of the year, for "21." It was last year's top-selling album with more than six million copies sold and remains lodged at the No. 1 spot on this year's charts.

Her victories tied her with Beyonce as the most wins by a woman in one evening.

"Mom, gold is good!" Adele shouted as she took the album of the year trophy.

The celebration of Adele came on a night where the Grammys marked the loss of one of music's great female voices - and one of its most prized talents overall. Whitney Houston died the night before the Grammys, casting a shadow over music's biggest night.

But while her death lent a somber overtone to the evening's show, it did not overwhelm it, perhaps best proved by the show's closing number, a jam session featuring Paul McCartney, Bruce Springsteen, Tom Petty, and Dave Grohl among others.

The night's other big winners were Grohl's Foo Fighters, who won five Grammys. Kanye West, who was the night's top nominee with seven, won four awards.

Among the evening's performances was a dance-heavy number by Chris Brown, a performance by Paul McCartney and by Bruce Springsteen, who kicked off the show by performing his new song "We Take Care of Our Own," a rousing song that references the troubles of the nation.

But the evening's most moving moment came as Jennifer Hudson - who has called Houston an inspiration and one of her biggest idols - emerged to sing one of Houston's signature songs, "I Will Always Love You." Dressed in black, with only the accompaniment of a piano, Hudson appeared to fight back tears as she sang the song, ending with the line, "Whitney, we will always love you."

The show started off on a somber note, as host LL Cool J appeared in black, and told the audience: "There is no way around this. We've had a death in our family." He then led the audience in prayer to "our fallen sister."

"Heavenly father, we thank you for sharing our sister Whitney with us," he said. "Though she is gone too soon, we remain truly blessed to have been touched by her beautiful spirit." Stars like Lady Gaga and Miranda Lambert bowed their heads in silence. So did Mitch and Janis Winehouse, parents of Grammy winner Amy Winehouse, who died in July at age 27.

Stevie Wonder also paid tribute: "To Whitney up in heaven, we all love you."

The show, as usual, was heavy on performances more than awards. Among those was Chris Brown, who was performing on the Grammy stage for the first time since he dropped out of 2009's broadcast; his attack on Rihanna the night before led to both of their absences, an assault charge for Brown and a career low.

But 2011 marked a comeback for Brown, who performed twice during the show and won best R&B album: "First and foremost, I gotta thank God, and thank the Grammys for letting me get on this stage and do my thing," he said. "All my fans, I love you. We got one. Thank you."

The ceremony also marked first time he and Rihanna performed at the same event since the attack (she sang solo and with Coldplay during the ceremony).

"It's really hard to accept this award. Well, there's so much talent out here, like on this stage. There's a lot of talent that's not here tonight. It's also hard to accept because when I started to make songs I did it for the inherent reward of making songs, so I'm a little bit uncomfortable up here," he said. "But with that discomfort I do have a sense of gratitude. I want to say thank you to all the nominees, all the non-nominees that have never been here and never will be here."

The Grammys did their best to keep a tone that balanced the many moods of the night: The Foo Fighters performed in a tent outside the Staples Center, where the awards were being held, amid a throng of bouncing fans; but moments earlier, Alicia Keys and Bonnie Raitt paid tribute to Etta James, the legend who died last month.

There was also a tribute to the recently reunited Beach Boys that featured Maroon 5, Foster the People and Mike Love, Al Jardine and Brian Wilson, the three remaining members of the Rock and Roll Hall of Fame band, all pitch-perfect as they brought the group's California rock sound and harmonies back to life.

Other performances came from Kelly Clarkson and Jason Aldean, Taylor Swift and Katy Perry. Glen Campbell, who announced his retirement last year after disclosing he had Alzheimer's disease, performed with The Band Perry and Blake Shelton, singing his classic hit, "Rhinestone Cowboy."

The Foo Fighters and Brown also returned for another dance-themed performance, a first for the Grammys. It also featured deadmau5, David Guetta and Lil Wayne.

And with Lady Gaga not performing, Minaj stepped in to give the night's most bizarre performance. The rapper's number included a clip that referenced "The Exorcist" and a stage show that had her levitating on stage amid a church-like background, with hooded choir members and religious imagery.

The ceremony also marks the first since a major overhaul of the categories last year: They were trimmed from 109 to 78.