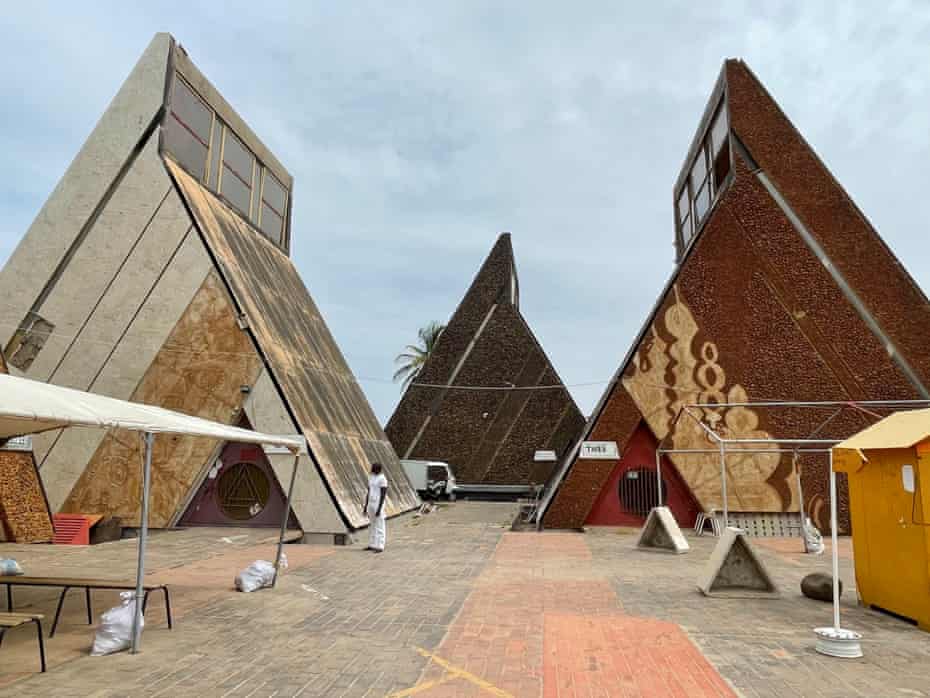 After independence in 1960, the country cast off western influences and forged a new African style full of triangular forms, rocket-shaped obelisks and rammed earth. Is this spirit now being suffocated? Our writer takes a tour of the capital.

After independence in 1960, the country cast off western influences and forged a new African style full of triangular forms, rocket-shaped obelisks and rammed earth. Is this spirit now being suffocated? Our writer takes a tour of the capital.

Visiting the International Fair of Dakar is like taking a stroll through the ruins of some ancient Toblerone-worshipping civilisation. A cluster of triangular pavilions rises from a podium, each clad in a rich pattern of seashells and pebbles. These are reached by triangular steps that lead past triangular plant pots to momentous triangular entranceways. All around, great hangar-like sheds extend into the distance, ventilated by triangular windows and topped with serrated triangular roofs. All that’s missing is triangular honey from triangular bees.

Built on the outskirts of the Senegalese capital as a showcase for global trade in 1974, this astonishing city-sized hymn to the three-sided shape was designed by young French architects Jean Francois Lamoureux, Jean-Louis Marin and Fernand Bonamy. Their obsessive geometrical composition was an attempt to answer the call of Senegal’s first president, the poet Léopold Sédar Senghor, for a national style that he curiously termed “asymmetrical parallelism”.

After the country gained independence from France in 1960, Senghor was determined to use the arts to forge a new national identity, liberated from western tradition and drawing from African civilisation, particularly Sudano-Sahelian traditions, “without wavering from the requirements of modernity”. Senghor never quite defined what this brave new style should look like, but he spoke vaguely of “a diversified repetition of rhythm in time and space”. Forceful, faceted forms and strong, rhythmic geometries became the vogue.

Dakar is home to numerous structures that attempt to meet Senghor’s ambitions. The international fair complex is the most spectacular, its composition loosely nodding towards a nomadic desert settlement of tent-like forms, dotted with everything from animal horns and shells to clay pipes and gnarled volcanic rocks. It is in a sorry state, although a Getty-funded conservation project is currently under way, and it is still possible to see how it attempted to forge a bold new path, combining modern techniques with indigenous traditions, creating an expressive, sculptural language rooted in its context.

Many such projects feature in the Atlantic coast volume of Sub-Saharan Africa, an immense new architectural guide that brings together a staggering collection of more than 850 buildings from 49 countries within 3,400 pages. Seven years in the making, the publication provides an illuminating cross-section of the continent, from the glittering skyscrapers of oil-rich Luanda in Angola to the mud mosques of Mali and the art deco buildings of Burundi. It boasts more than 350 authors, half with African roots (it’s also available in individual volumes, allowing you to spread out the load of the full 8kg set).

Philipp Meuser and Adil Dalbai, co-editors of the guide, write of how, on the one hand, “glossy magazines featuring Africa normally show safari lodges with pseudo-ethnic architecture, or fancy resorts located on expanses of long sandy beaches” or, on the other, “reports on over-population and lack of education and healthcare”. But there is hardly any reporting on everyday architecture, offering a “real” picture of African cities. While by no means comprehensive, the guide aims to fill part of that void, combining descriptions of historic, vernacular and contemporary buildings, considering them against the background of race, gender and power, be it colonial, neocolonial or local.

On a recent visit to Dakar, the book was an invaluable companion to help understand the jumbled urban fabric of the chaotic coastal capital. One curious confection looked like a fantastical postmodern interpretation of Sahelian mud architecture, with curved rocket-like obelisks projecting from its corners, painted a rich rusty red, and rain spouts echoing the overhanging wooden beams of vernacular mud construction. This is the Institute of Social Hygiene, which was actually designed by the architect Henry Adenot in the 1930s, when the French colonial authorities ditched their usual beaux arts style and attempted to adapt buildings to local contexts in the name of cultural integration.

Any local inspiration was usually surface-deep: in this case, the ochre-coloured walls are made of reinforced concrete, but painted to look like sun-dried earth. In Senegal, French architects mainly drew inspiration from Sudanese and Moroccan styles – made popular by international expositions in Europe – ignoring the local architecture of the Wolof, Serer, or Fulani peoples.

It is the postcolonial architecture of the 1970s and 80s that really stands out for its originality, much of it by Senegalese architects Cheikh Ngom and Pierre Goudiaby Atepa, as well as France’s Henri Chomette. They all developed a distinctive form of modernism in tune with President Senghor’s ideas of asymmetrical parallelism. Monolithic tapering pillars, often in rough-textured concrete, support powerful chiselled volumes, with an inventive use of pebbles, rocks and shells to add a tactile, rugged texture to the almost primitivist forms.

Dakar’s Cheikh Anta Diop University is one of the best places to see this kind of work. One cluster of lecture theatres, designed by Chomette and Roland Depret in 1976, comprises five white, curved, windowless structures raised on textured brick plinths, arranged around a kind of village courtyard. As you get closer, you realise that the bobbly white surfaces are made from painted seashells, while the streaked brickwork is designed to evoke tree bark. You step up from the courtyard into the enigmatic white cocoons, which house steeply raked lecture halls sunk into the ground.

The faculty of law and political science, by Cheikh Ngom, has an equally striking presence. Its knobbly red lava rock walls – covered with a sort of supersized volcanic pebbledash – are flanked by tapering buttress-like fins, rendered in textured sandy concrete, opening up to reveal a shady open-air lobby full of spaces to sit and chat out of the sun.

The buildings of this era show a much more sensitive approach to the local climate than recent developments, with brise-soleil screens, deep-set windows and large overhangs to allow as much passive cooling as possible. It is notable that Dakar’s two recent trophy projects – the Chinese-built grand theatre and the Museum of Black Civilisations – share a could-be-anywhere aesthetic and have to be entirely air conditioned.

Both are the doing of Abdoulaye Wade, Senegal’s president from 2000 to 2012, who had a penchant for oversized cultural baubles he could put his name on. The most gargantuan looms above the city on a hill to the west, in the form of the magnificently kitsch African Renaissance Monument. Featuring a ripped topless man and his copiously bosomed, scantily clad wife, complete with pointing baby held aloft, the 49-metre-tall bronze statue was made by North Korean sculptors at a cost of $30m (£22m).

Taller than the Statue of Liberty, it has been widely ridiculed as a symbol of the vain profligacy of the former president, who claims intellectual property over the monument and still receives 35% of the income from ticket sales. Many Dakarois appear to share the view of the late Senegalese master sculptor Ousmane Sow, who lambasted the statue as “aesthetically childish and banal in the extreme”. Still, once you’ve climbed the 200 steps up to its base, it provides a great vantage point to admire the teeming city below.

It’s easy to think Dakar’s architectural golden age is long gone, given the quality of what is now being built – and the fact that the only official architecture school closed in 1991. Many structures from the post-independence era have been demolished or mutilated beyond recognition. Chomette’s striking Hotel Independence, which once stood as a great vertical beehive facing on to the city’s central square, was recently stripped to the bone, its sculptural hooded window shades amputated and the remaining shell smothered in cheap grey cladding.
La Pyramide, Abidjan, Ivory Coast
The forgotten masterpieces of African modernism
Read more

But the guide offers a glimmer of hope from a new generation of young architects and engineers rediscovering vernacular techniques. I hadn’t given my hotel, the Djoloff, a moment’s thought until I found its extension listed in the guide as an example of the revival of compressed earth bricks. The seven-storey structure was built by Doudou Dème, who studied earth engineering in Grenoble before returning to Senegal to establish his company, Elementerre, in 2010.

In a nation addicted to concrete, where cement bricks are cast on site for practically every kind of building, Dème and his peers face an uphill struggle. But the benefits of his earth bricks – which are low-carbon and highly insulating – are clear, especially as he combines them with organic typha insulation panels. Providing thermal comfort and regulating humidity, they make air conditioning obsolete. We may yet see a future of planet-friendly asymmetrical earthen parallelism.